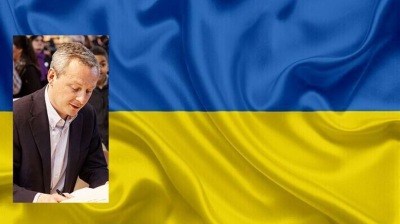 Ukrainian President Volodymyr Zelenskiy has been touring the region and has signed a slew of investment deals most recently with Turkey and Qatar, and now France.
By bne IntelliNews May 14, 2021

Ukraine has signed off on €1.3bn worth of investment deals with France, the Ukrainian government said in a press release on May 13.

The deal was signed during an official visit by French Economic and Finance Minister Bruno Le Maire to Kyiv.

"According to the Prime Minister of Ukraine Denys Shmyhal, the concluded intergovernmental agreements will contribute to the development of the country, improve the lives of Ukrainians and increase the level of co-operation with the French Republic," the government statement said, as cited by Interfax Ukraine.

Amongst the deals agreed was the supply of 130 electric locomotives by Alstom for a total amount of up to €900mn, with a local comment of 35%; the supply of specialised rescue equipment for work on high-rise buildings, 370 ladders worth up to €300mn; improvement of water supply in Luhansk region for the amount of €70mn; and improvement of water supply in Kyiv for the amount of €70mn, Interfax Ukraine reports.

"All projects provide for localisation at Ukrainian enterprises from 30% and higher, which is quite consistent with our strategy for the development of national production," Shmyhal said.

Le Maire said that Ukraine has significant economic potential and opportunities, and added that Ukraine and France have a lot in common to work together for the future.

Despite the political problems and Russia’s interference in the economy, the investment climate in Ukraine is brightening, as bne IntelliNews featured in a recent feature “Ukraine poised for take-off”, as incomes have doubled in the last two years, starting a virtuous circle of spending, profits, investment and rising wages.

At the same time, Ukrainian President Volodymyr Zelenskiy has been touring the region and signing a slew of investment deals most recently with Turkey and Qatar, and now France.