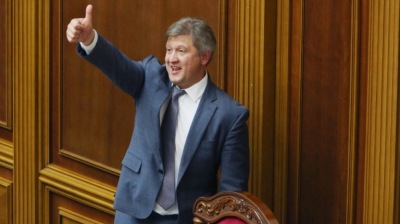 "A corresponding statement of resignation was made by Danylyuk addressed to Ukrainian President before the start of Volodymyr Zelenskiy’s working visit to the United States to attend the 74th session of the UN General Assembly," the presidential office said in a statement. "The President will consider it after his return to Kyiv."

A candidate for Prime Minister, in May Zelenskiy eventually appointed Danylyuk as secretary of the NSDC. Before Zelenskiy's victory, the former finance Minister was one of Zelenskiy's principal advisers.

On May 22, Danylyuk said that his vision on the NSDC's activity is being discussed with Zelenskiy. "I see it a little bit broader than it has been in recent years," he said, adding that he sees the NSDC as "the centre of stability" in the country.

On September 27, Danylyuk confirmed reports of his resignation. "I'll continue working pending the president's decision," he wrote on his Facebook page.

Meanwhile, the Novoe Vremya magazine reported the same day that resigns due to a conflict with head of the presidential staff Andriy Bohdan, a close associate of Zelenskiy and Ukrainian oligarch Ihor Kolomoisky. Among another reasons, alleged Danylyuk’s opposition to possible compensation to Kolomoisky for the 2016 nationalisation of the nation's largest lender PrivatBank.

Former NBU governor Valeriya Gontareva, who ordered the nationalisation of Privatbank in December 2016, called the court decisions “entirely corrupt” and she and her family have suffered a string of attacks in the last few months. Gontareva’s house was burnt down in an arson attack on September 16 that she claimed was Kolomoisky acting out of revenge. The National Bank of Ukraine (NBU) later issued a statement calling to “stop terror” against the bank and its former staff.

In June 2018, Ukraine's parliament. the Verkhovna Rada, sacked the well-regarded Danylyuk from the post of finance minister following his bitter conflict with Prime Minister Volodymyr Groysman.

The move followed Groysman's official request to the parliament urging the legislature to dismiss Danylyuk. The premier was upset by a letter sent recently by Danylyuk to the G7 ambassadors in Kyiv, in which the latter disclosed details of his conflict with the PM.

The uncertainty surrounding Zelenskiy relationship with Kolomoisky is also believed to be a factor that prevented the International Monetary Fund (IMF) from agreeing on a new deal with the government. The IMF team has just spent a week in Kyiv negotiating with the authorities, but it is holding back on reaching an agreement until Zelenskiy makes a clear statement about the future of Privatbank, according to reports.