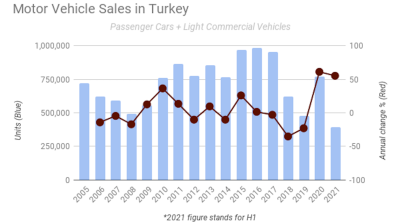 Some 56% of the 2.3mn second-hand cars that changed hands in January to June in Turkey were more than 10 years-old, while 82% were older than five years-old, data compiled by EBS Danismanlik showed on July 28.

The cheapest new passenger car in Turkey is sold for Turkish lira (TRY) 300,000 ($35,831) due to the effects of tax hikes and lira depreciation, Emre Ozpeynirci wrote on July 31 in Para Kule. The net minimum wage in Turkey, embroiled in an economic crisis even prior to the arrival of the coronavirus crisis, stands at TRY2,826 ($338). Around 40% of the workforce earns the minimum wage. The median wage, meanwhile, has been nearing the level of the minimum wage.

Even second-hand cars are now proving out of reach to many Turkish consumers. Second-hand car sales, which broke records in 2020, were down 25% y/y in H1.

“Realities in Second-hand Auto Market” – Shares of second-hand car sales based on age groups during January-June 2021.

A total of 310,325 passenger cars were sold in Turkey in H1, up 52% y/y thanks to the base effect caused by the coronavirus pandemic impacts seen in the same period of 2020.

Also in January-June, 263 passenger car models of 41 brands were sold in Turkey, Ozpeynirci wrote on July 10.

Tofas’ Fiat Egea Sedan was the market leader with a 9.51% share in the passenger car market in H1.