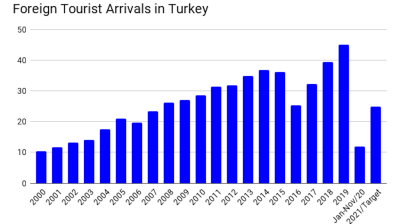 Around 2,000 Turkish hotels and other tourist facilities, from the 5-star to the boutique, are reportedly presently on sale on online platforms.

A total of 86 new adverts for the sale of hotels in Turkey were uploaded on popular e-commerce platform Sahibinden.com in the first two days of 2021.

Turkish daily Sozcu defined the situation as reflecting “panic in the tourism industry” while Mehmet Isler, deputy head of the Turkey Hoteliers Federation (TUROFED), told the newspaper that hotel owners were worried about losing their properties to banks as they cannot foresee how tourism will turn out in 2021. Turkey’s tourism industry was last year devastated by the coronavirus (COVID-19) crisis.

In December, Top Hotel News reported that there were 44 new hotels with 8,183 rooms under construction in Turkey.

On January 5, Sururi Corabatir, head of Turofed, said that the industry was targeting at least 25mn foreign tourists in 2021.

In 2020, foreign tourist arrivals in Turkey fell to less than 13mn, the lowest figure seen since 2001. Even 25mn arrivals in 2021 would be lower than the level in 2016, a year when the country’s tourism industry struggled after a string of terrorist attacks and a failed military coup attempt.

If the course of the pandemic comes to mean Turkey cannot properly launch its tourism season in April, it would bring about a tectonic collapse within its economy.

On January 5, the World Bank warned there is a risk that 2021 growth could turn out to be much weaker in tourism-dependent economies of Central Europe, Turkey and the Western Balkans.