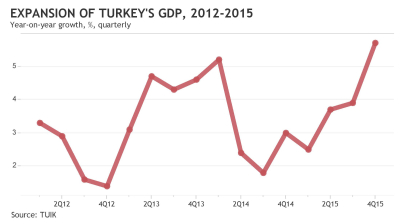 The Turkish economy grew by 4% last year, after expanding at 3% in 2014, despite political uncertainties in the first half of the year, renewed clashes in the country’s Kurdish region and geopolitical tensions. The main drivers behind the economic growth last year were consumer and public spending. 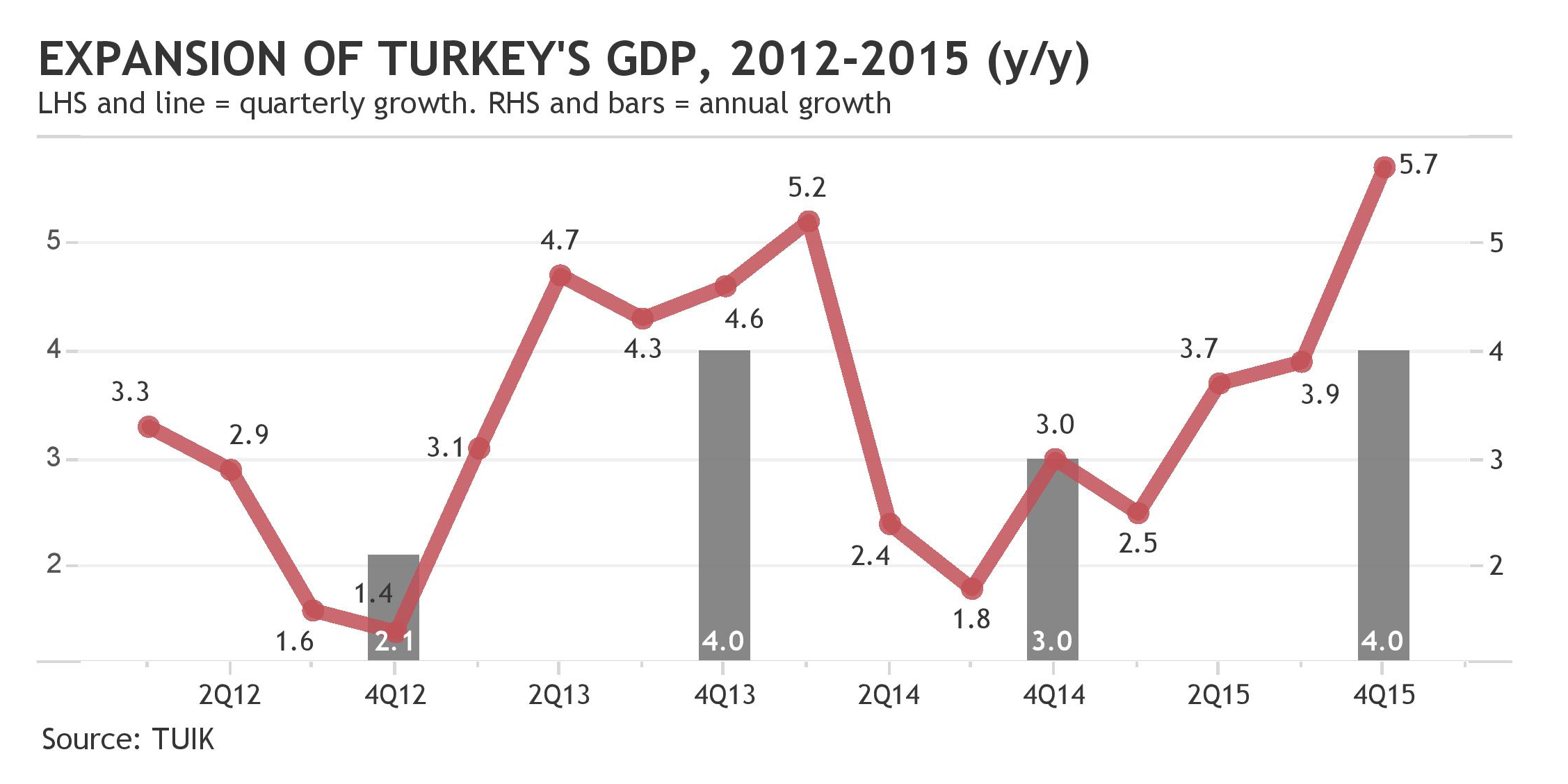 On a seasonally and calendar adjusted basis, GDP expansion slowed to 0.7% q/q in the fourth quarter of 2015, from 1.2% q/q in the previous quarter.

Government final consumption, another key driver behind economic activity, showed a robust 8.1% y/y increase in the last quarter versus the 8% y/y rise in Q3.

Gross fixed capital formation, on the other hand, was up 3.5% y/y in the fourth quarter after remaining flat in Q3. In the whole of 2015, total investments increased by 3.6%, which compares with the 1.3% contraction in the previous year.

The government expects the Turkish economy to grow by 4.5% this year. The performance of the Turkish economy has been better than expected since the beginning of the year: industrial production increased by 5.6% y/y in January, well above the estimates, and the capacity utilisation rate in manufacturing increased to 74.3% in March from 73.5% in the previous month.

The government’s decision to hike the minimum wage by 30% for 2016 will definitely boost domestic demand. But the central bank will need to take necessary steps to contain the adverse effects of this increase on inflation which currently hovers around 9%. The European Commission said in its latest Winter Economic Forecast that private consumption was expected to increase 3.4% this year versus 4.2% in 2015.

Despite a wave of terrorists attacks on the country’s two largest cities, consumer confidence increased by 0.5% m/m in March, after declining in the previous three months. Business confidence rose for a third consecutive month in March, the index hitting 106.

But, the problems in the tourism sector may start to weigh on the economy in the coming months, through job losses and extra financial pressure on hotels and tourism-related service companies. Foreign tourist arrivals dropped 10% y/y in February, marking a decline for the seventh consecutive month.

The loss of tourism revenues can also create problems for the country’s banks. Hakan Ates, CEO of private lender Denizbank, recently said the tourism industry owned as much as $17bn to banks, Bloomberg reported on March 29.

Commenting on the Q4 GDP data, Tim Ash at Nomura said: “I would think that growth might be 1% lower, at 2.5-3%, albeit given the Q4/15 performance the risks now might be on the upside. Slower growth would though have a silver lining, in a likely further moderation in Turkey’s key Achilles heel, the still large current account deficit.”