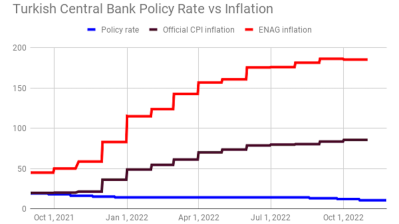 The Turkish central bank’s monetary policy committee (MPC) on November 24 cut its policy rate by another 150 bp to 9% (chart).

The policy rate was now adequate and the rate-cutting cycle that started in August, bringing 500 bp of cuts in all, was at an end, an accompanying statement from the regulator added.

The move was in line with expectations.

Liam Peach at Capital Economics said in note to investors: “Turkey’s central bank (CBRT) delivered another 150bp interest rate cut, to 9.00%, at today’s meeting and suggested that this marked the end of the easing cycle. We’ll take the CBRT for its word but there is clearly a risk that President [Recep Tayyip] Erdogan forces the central bank to cut interest rates further in the coming months, particularly as the 2023 elections come into view.”

The authority expects official inflation to peak at below the 90%-level in November and to sharply fall in December due to the base effect thanks to the high inflation figure (14% m/m) reported for December 2021.

The guidance was based on the assumption that the Turkish lira (TRY) will not experience another crash. During November 24, the USD/TRY was up 0.1% to 18.63 from 18.6 on October 27.

The turbulence-free mood on the global market continues despite some anticipation that November would bring difficulties. Not too long from now, the new year rally should start. Signs of a sharp decline prior to the beginning of the new year rally are not visible but could still come.

Turkey’s five-year credit default swaps (CDS) remain below the 600-level, while the yield on the Turkish government’s 10-year eurobonds remains below the 10% level.

COMMENT: The new Cold War will be different, and not only because of China
At least 500 dead after huge earthquake hits Turkey, Syria in early hours
Turkish minister tells US ambassador ‘Take your dirty hands off Turkey’ as sanctions sparks fly