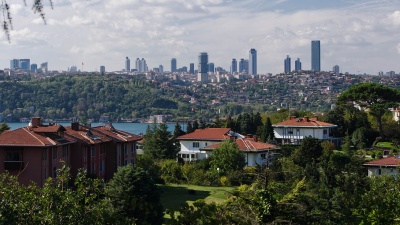 Troubled financial district on the horizon. Rising skyscrapers in Istanbul's Levent used to symbolise a booming economy for Turkey. No more.
By bne IntelliNews September 20, 2019

Turkey’s top banks have reportedly been in talks on creating an asset management company (AMC) to which they would transfer their higher-quality non-performing loans (NPLs).

The move is seen as one possible solution to the country’s bad debt problem which has soared since the lira crisis of summer 2018.

On September 17—with the Erdogan administration growing impatient over lenders’ lack of progress in dealing with bad debt which is hindering attempts to help Turkey bounce back from the bitter recession that took a hold earlier this year—banking watchdog BDDK instructed banks to convert Turkish lira (TRY) 46bn ($8.1bn) in loans to NPLs and provision for losses by year end.

Both state and private banks have discussed the possible AMC in recent weeks, according to two people familiar with discussions quoted by Reuters on September 19. The sources referred to by the news agency—a senior banker and a bank adviser who both requested anonymity—said talks were ongoing.

The AMC is a possible alternative to an effort to establish a fund-of-funds that would house tens of billions of dollars of bad construction and energy sector debt, they said.

Local reports say around half of the loans that the BDDK wants reclassified as NPLs were made to the construction and energy industries.

Separately, a trio of Turkish banks said on September 19 that they have mandated Morgan Stanley as financial adviser for the sale of a special purpose vehicle (SPV) that holds a 55% stake in Turk Telekom.

The three lenders are Garanti, Is Bank and Akbank. They said last December that Turk Telekom shares previously held by Ojer Telekom (OTAS) had been shifted to an SPV named Levent Yapilandirma Yonetimi. The banks said that their main objective is to switch the shares to a “competent” investor. The stake could be worth around $3bn, Barron’s quoted people close to the situation as saying.

“Morgan Stanley... has been mandated as financial adviser for sale of Levent Yapilandirma Yonetimi or its 55% stake in Turk Telekom,” the banks said in separate identical statements.

Necessary steps for the process and sale negotiations with potential buyers would begin, they added.

OTAS is a unit of Dubai-based Oger Telecom. In 2013 it took out a $4.75bn loan—at the time Turkey’s biggest corporate loan—to purchase the 55% stake in Turk Telekom. But OTAS failed to keep up payments.

Since last summer’s Turkish lira crisis, which wiped out around a third of the value of the TRY versus the USD during 2018—the currency has lost around another 7% in 2019 to date—many companies in Turkey, which earn their revenues in local currency, have struggled to repay foreign currency loans.