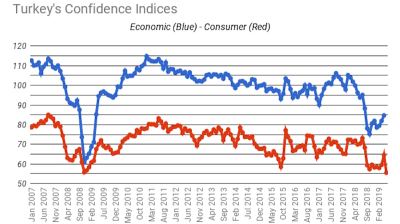 Turkey's consumer sentiment index nosedived 14% m/m to 55.5 in May from 64.5 in April, data released by national statistics office TUIK showed on May 21.

May thus saw the lowest consumer confidence reading and the sharpest monthly decline in consumer sentiment since 2004, the year the index was first compiled.

TUIK also puts out a calendar-adjusted index in its consumer confidence press releases. Its reading fell by 13% m/m to 55.3.

“The big picture is that the government implemented substantial fiscal stimulus in the run-up to March’s local elections, which appears to have returned the economy to growth in Q1. And with the Istanbul mayoral election scheduled to be re-run on 23rd June, more stimulus is on the cards in the coming weeks. But this is likely to lead to a fresh deterioration in the current account position, leaving the lira more vulnerable to bouts of investor risk aversion,” Liam Carson of Capital Economics said on May 17 in a research note.

The new wave of depreciation seen this year in the Turkish lira, which gathered pace in March and April and took the currency to weaker than six-to-the-USD in May—a pyschologically important threshold—could be the main development that explains the sharp drop in the consumer confidence index.

Puzzled market players
Meanwhile, the Erdogan administration’s interventionist management of the currency crisis- and recession-dogged economy continued to puzzle market players on a day when the central bank revived its one-week repo auctions to fund lenders’ at 24% rather than funding them at 25.5% via the overnight window—the method which was in place for around two weeks.

Investors were still weighing up Turkey's banking watchdog decision to impose a one-day settlement delay for FX purchases of more than $100,000 by individuals. Bankers said that move could raise concerns about capital controls.

"The administration seems to be increasingly desperate to keep the lira stable at all costs ahead of the re-run of the crucial vote in Istanbul," Rabobank emerging markets forex strategist Piotr Matys was cited as saying by Reuters.

"Instead of providing investors with a much needed assurance, such measures will have the opposite effect, as the market will interpret it as rising interference in the banking sector," he added.