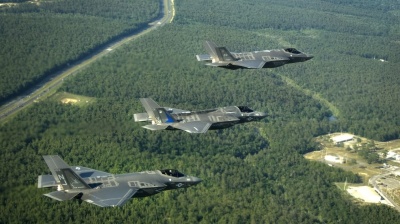 US Navy, US Marine Corps and US Air Force Lockheed Martin F-35s participate in a training sortie together near Eglin Air Force Base, Florida.
By bne IntelIiNews February 19, 2021

Turkey has reportedly hired a Washington-based law firm to lobby for its readmission to the US F-35 stealth fighter jet programme from which it was suspended due to Ankara’s acquisition of Russian S-400 advanced missile defence systems.

The hiring of law firm Arnold & Porter on a six-month contract worth $750,000 is outlined in a filing with the US Department of Justice, Reuters reported on February 19.

As things stand, Nato member Turkey risks being unable to source a fleet of the world’s most advanced fighter jets, namely fifth generation aircraft, while watching other countries, including regional arch-rival Greece, move ahead with their orders for such planes. An alternative might be the Russian Sukhoi Su-57, which has lately entered service with the Russian Air Force, but acquiring more high-end military hardware from the Kremlin might not be the way to go if Ankara wishes to keep on workable terms with Washington.

Prior to the row over the S-400s, Ankara was expecting to purchase more than 100 F-35 stealth fighters. Turkish defence contractors remain employed in making parts for the production of the F-35—though Turkey is suspended from the F-35 programme, the US and allies have been unable to rapidly switch the Turkish component contracts to other countries—but the US Biden administration has thus far stuck to the line that F-35s cannot enter service in the Turkish Air Force because the security of their performance data might be jeopardised by Turkey’s operation of its S-400s.

The contract with Arnold & Porter is for “strategic advice and outreach” to US authorities. Ankara has said its removal from the F-35 programme was unjust, and Turkish President Recep Tayyip Erdogan has said he hopes for positive developments under US President Joe Biden.

The contract was signed with Ankara-based SSTEK Defence Industry Technologies, owned by the Turkish Presidency of Defence Industries (SSB), Ankara’s main defence industry authority. Arnold & Porter is to “advise on a strategy for the SSB and Turkish contractors to remain within the [F-35] Joint Strike Fighter Program, taking into consideration and addressing the complex geopolitical and commercial factors at play,” the contract said.

Turkey’s communications director Fahrettin Altun said Turkey had already paid for some F-35 jets. “Even a hangar fee was taken from Turkey for the jets it could not take delivery of,” he told a Nato-related event on February 18, Reuters reported.

Turkish defence minister Hulusi Akar, speaking after a Nato defence ministers’ meeting this week, said he had “brought to the clear attention of our allies that licensing restrictions, attempts for sanctions or even the threat of sanctions against Turkey” only weaken the alliance.