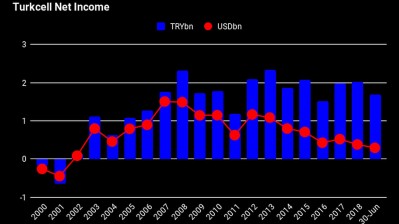 The board of directors at Turkcell (TCELL) will propose at the general assembly meeting to be held on September 12 that the planned distribution of TRY1.01bn worth of gross dividends from the telco’s 2018 profit will be made in a single instalment rather than the previously announced four instalments, the company said on September 11 in a stock exchange filing.

Accordingly, the company will distribute TRY0.46 gross or TRY0.39 net dividends per share on October 31.

The gross dividend yield stands at around 3.5%.

Turkcell previously said it would distribute dividends in four instalments on October 22 and December 17 this year, and January 14 and March 17 next year.

Following the filing by Turkcell, Sweden’s Telia Company, the largest shareholder in Turkcell with a 24% indirect stake through its minority interest in Turkcell Holding, which holds a 51% controlling stake in what is Turkey’s largest mobile operator, issued a written statement.

According to the statement, Telia Company and the other shareholders in Turkcell Holding, namely local conglomerate Cukurova Holding and Russian tycoon Mikhail Fridman’s LetterOne, have agreed to vote in favour of the dividend distribution proposal submitted by the board of directors of Turkcell.

Cukurova Holding has a 13.8% stake in Turkcell while Russia's Alfa Group, owned by Fridman, has 13.2%.

Telia expects to receive TRY243mn worth of dividends from Turkcell, the company also said.

In March, shareholders of Turkcell Holding agreed to distribute a total of TRY1.9bn worth of dividends from Turkcell’s 2017 profit.

Turkcell's main shareholders—Cukurova, Alfa Group and TeliaSonera—have been engaged in a longrunning legal dispute over control of the company. However, they managed to agree on dividends from the 2016 and 2017 profits.

The USD/TRY rate stood at around 5.75 ahead of the Turkish monetary policy committee meeting to be held on September 12, the same day that the ECB (September 12) rate-setters meet. The Fed will decide on its latest monetary policy stance over September 17-18. The TRY tested 5.7923 earlier in the day.

“Turkcell’s board has called an AGM for 12 September 2019, and recommended TRY 0.46 DPS distribution from 2018 profits (in line with the company’s 50% NI pay-out policy, and equivalent to a 3.4% yield and a TRY 1.01bn total amount)… Uncertainty over the dividend distribution has been one of the factors weighing on stock performance, in our view. Now it remains to be seen i) whether the AGM convenes to approve the dividend (likely, in our view), and ii) whether the dividend amount is increased (that has happened before, and could be a moderate catalyst for the stock, although in any case a yield of more than 5-6% is unlikely, in our view),” Ivan Kim of VTB Capital said on August 1 in a research note.

The market expected a TRY540mn profit in the quarter.

Ebitda rose 20% y/y to TRY2.6bn. The company’s assets and debts stood at TRY46bn and TRY22bn, respectively, at the end of the second quarter, according to a presentation on Turkcell’s website. Net debt was TRY11.3bn.

For the first half of 2018, Turkcell reported a net income of TRY1.69bn which translated to an annual increase of 84.5%.

The company had a total of 36.8mn subscribers, including 18.9mn postpaid and 15mn prepaid customers, as of end-Q2.

In July, Fitch Ratings downgraded Turkcell to BB- from BB+ following the downgrade of Turkey's sovereign Long-Term IDR from 'BB' to 'BB-', three notches below investment grade, and the Country Ceiling to 'BB-' from 'BB+'.