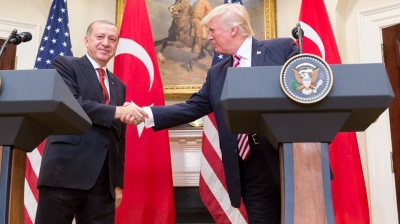 Turkish President Recep Tayyip Erdogan and Donald Trump have had a bit of a combustible relationship.
By bne IntelliNews March 5, 2019

Donald Trump has hit Turkey where it hurts again, with the US set to end Turkey’s preferential trade treatment under a programme that permitted some exports to arrive on the American market duty free.

The US Trade Representative’s Office (USTR) said on March 4 that both Turkey and India will no longer be included in the Generalized System of Preferences (GSP) because they are “sufficiently economically developed” and thus ineligible.

The US imported goods worth $1.66bn in 2017 from Turkey under the GSP programme, representing 17.7% of total US imports from Turkey, according to data from USTR’s website. The leading GSP import categories were vehicles and vehicle parts, jewellery and precious metals, and stone articles.

Turkey’s automotive exports to the US will not be significantly impacted by the planned move, a Turkish automotive industry source told Reuters. Last year, Turkey exported $1.1bn worth of vehicles and auto parts under the GSP, the source said, adding that without the GSP treatment, these autos and parts would be subject to a 2.5% customs tax.

Retaliatory tariffs
USTR said last August that it was reviewing Turkey’s eligibility in the programme. That announcement came after Ankara imposed retaliatory tariffs on US goods in response to American steel and aluminium tariffs. The trade tit-for-tat was seen as related to a multi-faceted dispute between Ankara and Washington over issues including the detention of a US evangelical pastor, who was later released by a Turkish court as bilateral relations appeared to ease. One issue that is still plaguing relations is Turkey’s determination to go through with the purchase of the S-400 advanced missile defence system from Russia despite stern warnings from fellow Nato member the US that the acquisition would be seen as an unfriendly move that would generate security risks.

It would take at least 60 days to remove Turkey from the Generalized System of Preferences, with notifications first to be sent to Congress and the Turkish government, USTR said. The final removal would be under a presidential proclamation, it added. US President Donald Trump notified Congress of his intentions regarding Turkey and India on March 4.

The GSP is one of the oldest and largest US trade preference programmes. It aims to promote economic development in beneficiary countries and territories by eliminating duties on thousands of products. Some 120 countries participate in it.

Under the GSP, "certain products can enter the US duty-free if the beneficiary developing country meets a set of criteria established by Congress". The criteria include providing intellectual property protection and giving the US fair and reasonable market access.

Japan wants deal by June
Separately, the Nikkei Asian Review wrote on March 5 that Japan aims to sign an economic partnership agreement with Turkey in June, as Tokyo's tariff-reducing deal with the European Union fuels a sense of urgency in Ankara.

Turkey faces European competition for many of its major exports to Japan, which include apparel, auto parts, pasta and fruit. The Turks are anxious that Tokyo's deal with the EU, which took effect in February, will put Turkish products at a disadvantage.

The two countries plan to hold this year's second round of working-level meetings towards a deal as early as April. Negotiations on the deal started in December 2014 and accelerated last year.

Toyota Motor and other Japanese companies operate production facilities in Turkey, which serves as a manufacturing hub for the European market thanks to its location.

Tokyo hopes to reduce tariffs in order to benefit Japanese manufacturers. They sell items such as autos, auto parts, motors and batteries to Turkey. The agreement would also help Japanese companies enter Turkey by relaxing investment rules and opening the country's services market.