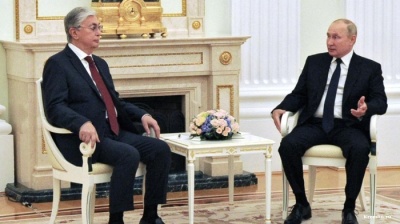 Russia's President Putin speaks with Kazakhstan's President Tokayev during a meeting at the Kremlin in August last year. / Kremlin.ru
By Peter Baunov in Almaty June 16, 2022

Kazakh President Kassym-Jomart Tokayev on June 15 told a Russian TV channel that Kazakhstan has no intention of breaking Western sanctions imposed on Russia over its invasion of Ukraine.

In an interview with Russia’s Rossiya-24 TV channel, Tokayev made it clear that previous comments from Kazakh officials that the sanctions would be respected were correct. “Sanctions are sanctions,” he said.

"We cannot violate them, especially because we receive warnings about possible so-called secondary sanctions against our economy from the West if we did violate the sanctions," Tokayev added.

"But I stress, we continue working with the Russian government, I would say in an intensified manner and reach necessary agreements, while not violating the sanctions," he said.

Kazakhstan, added Tokayev, still adheres to its duties as an ally of Russia, including through membership of Russian-led groupings such as the Eurasian Economic Union (EEU) and the Collective Security Treaty Organization (CSTO).

In addition, Tokayev downplayed the deployment of forces of the Kremlin-led CSTO defence bloc to Kazakhstan to help quell the country's "Bloody January" unrest, during which many analysts sensed Tokayev was threatened by a possible coup.

Stressing the fact that the Russian and other forces of the CSTO did not engage in any kind of peacekeeping operations, the president noted that some people in Russia “misrepresent the whole situation” by claiming that Russia “saved” Kazakhstan and now Nur-Sultan must for ever “serve and bow at the feet” of Russia. Tokayev said that the reasoning was “far from reality,” as the CSTO deployment did not fire a single bullet while in Kazakhstan and left within 10 days.

Russian President Vladimir Putin’s rhetoric on Ukraine claims that its statehood is a “fiction”. That echoes similar comments in the past he has made about Kazakhstan. Russian commentators continue to add fuel to such determinations. Russian TV talkshow anchor Tigran Keosayan, sometimes talked of as a Kremlin “attack dog”, earlier this year reacted to Nur-Sultan’s decision to not hold a military parade on Victory Day by calling Kazakhstan “ungrateful”, remarking that the ex-Soviet state should “look at Ukraine carefully, think seriously.”