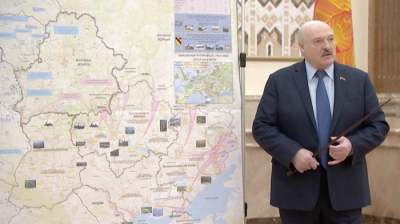 A picture from early March this year showing Belarus President Alexander Lukashenko in front of a purported invasion plan of Ukraine. / https://bne.eu/
By bne IntelliNews June 16, 2022

Since Russia’s invasion of Ukraine began in February, Belarus has regularly been conducting military drills along its border with Ukraine, claiming that they are aimed at preparing or checking the readiness of its troops for a possible future conflict with the West and Ukraine. The announcements of new drills have for the past two months been so frequent and have become so normal that they have come to be viewed as occasional sabre-rattling from Belarusian strongman Alexander Lukashenko.

However, while Ukraine isn’t afraid of an outright invasion by Belarusian troops, its general staff still thinks that Belarus remains a military threat and Minsk still has the potential to pose a long-term security threat to Europe in the years ahead.

On June 14, Belarus began a new round of exercises which will be led by the country’s Chief of Logistics of the Armed Forces. According to Belarus’ Defence Ministry’s press service, the exercises are aimed at “improving coherence of the military command of logistic control with their subordinate forces during the execution of logistical support tasks.”

After Minsk carried out its “surprise” readiness checks in May, the Belarusian army has engaged in “peace to wartime” transition drills and Lukashenko has even ordered the creation of a Southern Operational Command to manage military activities in southern Belarus.

On May 27, Lukashenko ordered the creation of a “people’s militia” around Belarus, and for the planned creation of its Southern Operational Command. Belarus is set to increase the country’s armed forced to 80,000 people according to Ukraine’s general staff.

Ukraine was not as alarmed as much Western media was by the readiness checks in May but still assessed that missile and air strikes from Belarusian territory remained a threat. Instead, Kyiv emphasised that Minsk was stepping up its reconnaissance missions and electronic warfare capabilities along the country’s southern borders.

Ukraine’s general staff emphasised this again in its report on Sunday, 12 June, saying that Belarus was performing “combat engineering tasks” to “reinforce checkpoints and deploy additional electronic warfare equipment in the areas near the border between Belarus and Ukraine”.

However, the head of Kyiv's Territorial Defence is still warning that an attack is possible, considering some new Russian but mostly large Belarusian detachments along the border with Ukraine. Oleh Zhdanov, military expert and member of Ukraine's general staff, has also warned that explosives planted by Belarusian troops along key roads and bridges could serve as a pretext for an attack.

Belarusian security forces have also stepped up their presence in schools during June by teaching students how to dig trenches, how to shoot (by using shovels for practice) and how to care for the wounded in war time.

In the short term, therefore, Belarus might not invade Ukraine. However, Belarus’ intensification of reconnaissance missions and electronic warfare capabilities along the border with Ukraine shows that it is prepared for both conventional and hybrid warfare in the future. What's uncertain is how close this future is.

By stepping up the security forces' presence in schools, calling regular citizens into peoples' militias and increasing the number of soldiers in the army, Lukashenko is also trying to instil a sense of patriotism and increase the regime’s ideological control over the population.

After Belarus removed the neutrality clause from its constitution in February this year and expressed openness to stationing Russian nuclear warheads in the country, fears arose among Western leaders and policy makers that this would not just remain simple talk but become reality.

While some Russian S-400 missile systems have reportedly been brought out of Belarus, new fears are emerging that Russia and Belarus might seek to restore a Soviet-era launching facility for nuclear and ballistic missiles.

This facility, where the Soviet Union and later the Republic of Belarus stationed a regiment of Strategic Missile Troops (RVSN) between 1959-1996, is today thought to be completely unusable. However, rebuilding and renovation of the existing facility in the coming years could enable Russia to move its nuclear and ballistic missiles further west.

As noted by Belarusian military analyst Yahor Lebiadok, Belarus’ recent moves on the military front could be seen as part of the ideas for strategic deterrence activities during peacetime, put forth by the head of the Main Operative Department of the General Staff of Belarus’ Armed Forces, Pavel Muraveiko.

In addition to these four tasks, Muraveiko adds three more during the emergence of a military threat:

In this way, Belarus’ current logistical exercises and its recent “readiness checks” can be seen as part of its attempts at strategical deterrence during peacetime.

However, while the first four tasks are quite predictable, the latter three are not. Furthermore, in conjunction with Belarus’ logistical support for Russia’s invasion of Ukraine, these tasks have a greater impact on Western and Ukrainian intelligence assessments.

This year, the West and Ukraine have been made painfully aware that Lukashenko’s threats made to Ukraine in 2021 were not just words, that Minsk implements orders given by Moscow and that various military exercises can in fact lead to war.

Belarus’ main support for Russia’s invasion of Ukraine was logistical and the current logistical exercises could be seen in the light of Belarus’ future role in Russian-Belarusian military plans, whether they are made for peacetime or not.

If the Belarusian general staff had wanted these large-scale troop movements to have a deterrent effect, it should not have given support to Russia’s invasion of Ukraine. Since the joint Russian-Belarusian exercise in February were shown to be a front for a planned invasion, the West and Ukraine have become more wary of Belarus and instead have chosen to scale up their military spending and the troop presence along their eastern borders.

EXPLAINER: how a price cap on Russian oil might work
3 hours ago
Russia catches a nasty dose of the Dutch Disease
5 hours ago
Sky-high inflation forces more Russians to take out “pay-day” loans
3 days ago
Death of China-to-Russia cargo transit routes means it’s all aboard for Kazakhstan
3 days ago
Armenia diaspora faces waning influence on Turkey, Azerbaijan negotiations
5 days ago