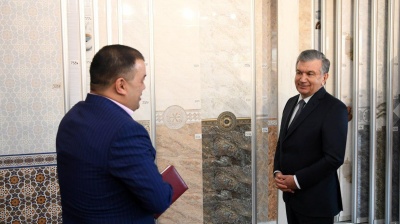 President Mirziyoyev, right, keeps up a busy schedule visiting enterprises up and down the country. Part of his role is to sign off on the awarding of sovereign wealth fund dollars to investors.
By bne IntelIiNews September 16, 2021

A corporation linked to a relative of Uzbek President Shavkat Mirziyoyev has received tens of millions of dollars from the country's sovereign wealth fund, according to the findings of an investigation by RFE/RL's Uzbek Service, published on September 15.

Orient Group, which is linked to a relative of Mirziyoyev, namely Oybek Umarov, is said to have received the funds via the Uzbek Oman Investment Company (UOIC). Umarov, a founder and shareholder of Orient Group, is the younger brother of Otabek Umarov, who is married to Mirziyoyev's daughter, Shahnoza.

The Investment Authority of Oman holds 75% of the UOIC's charter capital, with the remainder owned by Uzbekistan's Fund for Reconstruction and Development. The latter maintains the country's sovereign wealth fund.

According to the fund's official website, its capital grew to $25bn last year. The money is earmarked for developing basic economic sectors and generating benefits for citizens.

But the investigation by RFE/RL, conducted in cooperation with the University of Ulster's Kristian Lasslett, showed the Orient Group was a major recipient of state money in recent years.

Lasslett’s research into the UOIC's investment portfolio in Uzbekistan between 2016 and 2020 reportedly showed that 86%—or around $161mn—of the UOIC's total traceable investment in Uzbekistan during the period was made in companies, businesses and projects that belong to the Orient Group. Among them are Gold Dried Fruit Export, said to have received $25mn, and Binokor Temir Beton Servis, said to have got nearly $20mn in investments from the UOIC.

The Orient Group consists of at least 58 companies involved in sectors including banking, construction, retail, real estate and a soccer club.

An outstanding question is why the majority of the UOIC’s investments focus only on the Orient Group.

RFE/RL said it contacted both the UOIC and the Orient Group for comment but received no response.

According to Uzbek law, any allocation of money or loans from the sovereign wealth fund must be signed off by the president.

In 2010, when just 24 years-old, Oybek Umarov was registered as one of four founders of a major private bank, Orient Finans. Some of his acquaintances from his childhood in Ferghana Province told RFE/RL they remember him as a little-known cattle trader whose fortunes changed after his brother joined the Mirziyoyev family.

Despite the business empire linked to Oybek Umarov, he is said to keep a low profile in public, with no presence on social media.

Otabek Umarov, who has 10mn followers on Instagram, does not mention his wealthy brother on social media or in public.

Since taking office, Mirziyoyev has pledged to end Uzbekistan’s reputation as a haven for corruption, while embarking on a reform programme in the hope of drawing new foreign investment to Central Asia's most populous country.

OPINION: Afghanistan’s neighbours recast refugee finance formula
Efforts to deploy US counterterrorism forces in Uzbekistan may not be over
Uzbekistan rights ombudswoman says she is on top of Karimova case