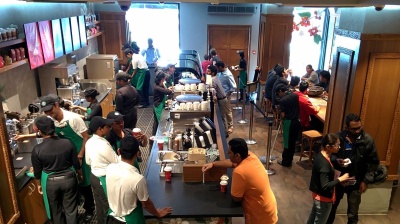 Starbucks has made a go of things in more than 70 countries. This outlet is in Bangalore.
By Alisher Kalandarov in Tashkent April 6, 2021

The international retail franchise operator Alshaya Group earlier this year announced plans to set up a Starbucks coffee chain in Uzbekistan. And now, according to information provided by AFC Uzbekistan Fund, its plans have started to come to fruition. The company has determined a premises for its first coffeehouse and has announced a commissioning date.

Uzbekistan is expected to see the grand opening of Starbucks’ flagship store in central Tashkent in 2022. Located on Taras Shevchenko, one of several “high streets” in the city, the Starbucks is to open in a recently renovated commercial building and become yet another global brand to enter Uzbekistan's highly underserved consumer market.

Another food retail giant, KFC, opened its first outlet in the Uzbek capital in 2018. It presently has seven stores across the capital and has plans to open at least 25 outlets in the regions.

Apart from world-famous brands, the country also boasts its own domestic consumer food market brands that have been realised from scratch. One of these is Yaponomama, which started out as a Japanese food delivery service. Over the past five years, the brand has managed to open nine restaurants across the city.

Hearty, rich and delicious Uzbek cuisine has, meanwhile, found its way to overseas markets. In 2018, Oshpaz.uz invested some $50,000 to set up production of canned pilaf, the king of Uzbek cuisine. Director of the company Xikmat Abdullaev said he had his own packaging production unit for canning as well as a teahouse, and he decided to combine both areas to create a new product. To date, canned pilaf is available via the virtual shelves of Amazon.com and other retailers across the world.