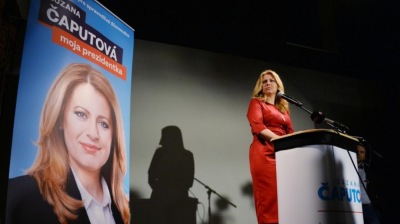 Slovak President Zuzana Caputova: "This is unacceptable during the present [coronavirus] crisis."
By bne IntelliNews March 24, 2021

Slovak President Zuzana Caputova has called on Prime Minister Igor Matovic (OLaNO) to step down to end the government crisis.

"The executive and legislative powers aren't fully operational. This is unacceptable during the present [coronavirus] crisis, unseen for decades," Caputova said, as quoted by the Slovak News Agency, adding that the crisis has deepened as not only ministers responsible for the crisis but also ministers on whose work the cabinet stands have begun leaving it.

So far four ministers have resigned in the rolling cabinet crisis and Speaker Boris Kollar adjourned parliament on March 23 until next week amid the growing chaos.

Divisions within the four-party centre-right coalition over Matovic's style of leadership have widened during the pandemic and have come to a head this month over the premier's secret decision to procure the Russian Sputnik V vaccine. On Sunday evening Matovic finally offered to resign but he set conditions that his coalition partners have rejected.

"The governing coalition with Kollar's decision on a week's adjournment of parliamentary talks confirmed that it's brought the state into total disruption," said former premier Peter Pellegrini, leader of the new opposition Voice party. "First the government was made dysfunctional, now parliament has become dysfunctional as well, even though it was supposed to deal with specific aid for people today."

Kolikova also said she is ready to return to the justice ministry, if the party caucus supports her in case of the government's reconstruction.

Her party colleague and For the People chair and Investment Minister Veronika Remisova confirmed that she is considering her resignation, too, “if we see that the negotiations are leading nowhere, which I hope will not happen”.

According to Sulik, if Matovic does not resign as he promised, by March 24, “Education Minister Branislav Grohling [SaS] and Foreign Minister Ivan Korcok [SaS nominee] will leave their posts on Thursday.”

Matovic announced on March 21 that he’s willing to step down as two of his coalition partners demand but only if Sulik, Kolikova and Parliamentary Vice-chair Juraj Seliga (For the People) step down. He also insisted that one ministry be transferred from SaS to his OLaNO party, and one parliamentary committee chairmanship.

"If our coalition partners meet the commitments that they’ve declared publicly and on which OLaNO has based its demands, I’m willing to step down from the helm of the government and operate only as its member," Matovic said.

However, according to Sulik, if “Matovic decides only to rearrange himself within the government, meaning that he won't be the prime minister but takes some other ministry post, then the SaS would insist on having three ministers in the cabinet. We emphatically reject giving up any government portfolio.”

Sulik stressed that his party stakes its claim to the three ministries it should have under the coalition agreement. "Furthermore, we will want to staff them with the same people as before. Korcok to lead the foreign affairs, Grohling the education ministry and I at the helm of the economy ministry," he added.

OLaNO is said to be willing to agree to a compromise, and let SaS keep its three ministries if Matovic is allowed to become Vice-premier for the Fight Against Corruption, a new and so far non-existent post.

"If the replacement of the prime minister were to occur, Heger would make a perfect candidate," Nad noted.