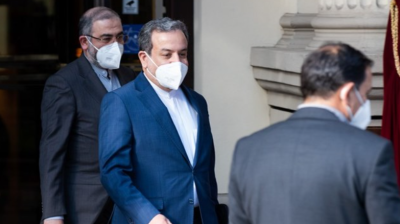 Signs are mounting that Iran and the US will find their way to agreeing a revival of the 2015 nuclear deal before the Iranian presidential election in mid-June.

US and Iranian negotiators are aiming for a final round of talks in Vienna next week on the terms for Washington’s re-entry into the nuclear deal (or Joint Comprehensive Plan of Action, the JCPOA), according to Iran’s chief negotiator and deputy foreign minister, Abbas Araghchi.

“I think good headway has been made with the talks over the past two weeks. A few key issues have remained, and they need further consideration, and decisions should be made about those issues in the capitals,” Araghchi was on May 19 cited as saying by the Guardian. Similar comments from Araghchi were reported by Iran's Fars News Agency.

The delegations, which have this week been meeting in Vienna in a fourth round of talks—although the US and Iran are not meeting face to face but are instead relying on shuttle diplomacy conducted by remaining major power JCPOA signatories—have reportedly agreed to return to national capitals to receive final instructions on red lines before a definitive round of talks.

Three main issues require conclusive ironing out. They are the specific sanctions on Tehran that the US is prepared to lift to enable the reactivation of the nuclear deal with full Iranian and US participation, how long Iran will be given to reverse nuclear development steps it has taken in breach of the deal in response to ex-US president Donald Trump unilaterally ending Washington’s participation in it in May 2018, and how to handle the fact that Iran has acquired nuclear knowhow in the time in which it has been non-compliant with the deal, including in enriching uranium to 60% purity (weapons-grade is around 90%, though Iran has always stuck to its line that it has never had an ambition to develop a nuclear weapon).

Iran’s outgoing president, the pragmatic moderate Hassan Rouhani, is under pressure from hardliners who many observers expect to claim the presidency in the upcoming election (its first round is on June 18). Some of those hardliners never wanted Tehran to enter the nuclear deal with the “untrustworthy” US in the first place and would be loathe to see it re-enter it in agreement with the Biden administration following Trump’s “deceit”.

Rouhani must therefore tread carefully. On May 19, he insisted that the Iranian negotiators in Vienna were acting entirely according to guidelines set by Iran’s supreme leader, Ayatollah Ali Khamenei—who has the final say on all matters of state—and that he had conveyed all Khamenei’s instructions to the negotiating team.

“I promise the people of Iran that the Vienna talks will end with the Iranian nation’s victory, and very big steps have been taken in this regard. If someone puts national interests aside to follow factional and partisan interests, they have betrayed the country,” Rouhani said.

While Trump failed to throttle the Iranian economy to the extent that was needed to force Tehran to the table to renegotiate a more stringent nuclear deal and its role in key Middle East conflicts and affairs, he did plunge Iran into a bitter recession of around three years, and even some hardliners might be wary of not taking a deal for a JCPOA revival consented to by US President Joe Biden if that deal is widely seen as more than reasonable. Pushing the Iranian people into more economic misery by stubbornly turning away from such an agreement and insisting that Iran can find its way to prosperity with a “resistance economy” model that turns away from the West might lead to much social disquiet.

There is some opinion polling evidence inside Iran that most Iranians would prefer to see the nuclear deal re-established.

Another fundamental requirement that must be met to keep the Vienna talks on track is an agreement from Iran to keep giving UN nuclear inspectors limited access to its nuclear sites. The Iranians struck a temporary understanding with the UN’s International Atomic Energy Agency (IAEA) in February on access for three months. The understanding means that video recording inside the sites continues, but without the need to hand the footage over to the UN inspectorate. However, the deadline on this arrangement expires next week.

If the arrangement is not renewed before the expiry date, Iran would be in a position to delete all recorded footage of its nuclear site activities. That would essentially leave the UN inspectors in the dark about what has occurred at the sites since February. And that would mean the collapse of the last surviving remnant of the deal.

Iran’s parliament, under the control of hardliners, has stuck to the line that Iran should not be required to return to full compliance with the JCPOA until after the lifting of sanctions by the US has been verified. But the other remaining nuclear deal signatories—France, the UK, Germany, Russia and China—do not support this proposed principle. Sergei Ryabkov, Russia’s deputy foreign minister and chief nuclear negotiator, has said Iran and the US should come back into JCPOA compliance simultaneously.

Russia raises key rate to 6.5% amid strong inflationary pressure
7 hours ago
Erdogan’s relations with West in danger of renewed deterioration in ‘Varosha’ row
8 hours ago
Ukraine makes surprise policy rate hike to 8% to fight inflation
13 hours ago
US court rules Kyrgyzstan in contempt for pushing ahead with local legal action against Kumtor Gold
16 hours ago
Turkey extends 'undeclared state of emergency'
23 hours ago