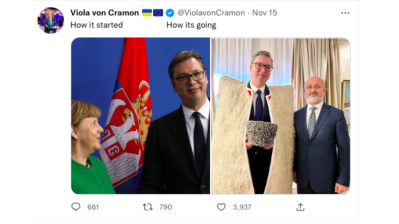 Von Cramon, the European Parliament rapporteur for the Western Balkans, has repeatedly criticised Serbia, an EU candidate country, for maintaining friendly relations with Russia and failing to join Western sanctions following the invasion of Ukraine.

On November 16, von Cramon posted a picture of Vucic standing beside former German chancellor Angela Merkel next to one of the Serbian president dressed in a traditional Chechen coat and holding papakha (wool hat).

The capital read: “How it Started … How It’s Going”. 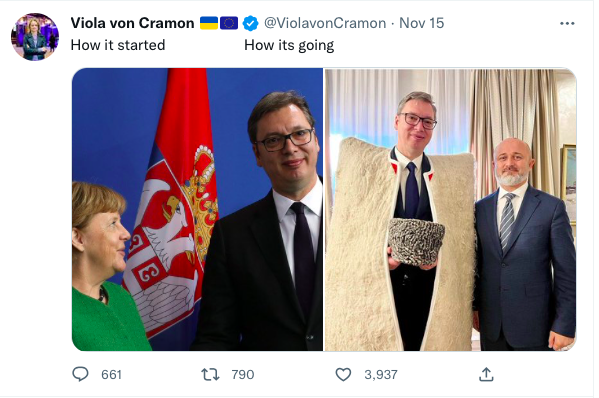 Vucic was gifted the coat and papakha by Turko Daudov, advisor to the ruler of Russia’s Chechnya, Ramzan Kadyrov, a close ally of Russian President Vladimir Putin.

After the meeting in Belgrade, Daudov posted the picture of himself with Vucic on Instagram with a caption thanking Serbia for its “support for the Russian Federation”.

“Due to a different time zone (Singapore), just saw this sad attempt at being funny. As an EU rapporteur, Viola doesn’t care that Pristina ignores the Brussels Agreement (10 yrs), instead she goes on & on about the Serbian President for doing exactly what EU leaders are doing. Hypocrisy,” Brnabic wrote.

“And, friendly advice: please @ViolavonCramon, get a consultant for humor. You need one,” she added. 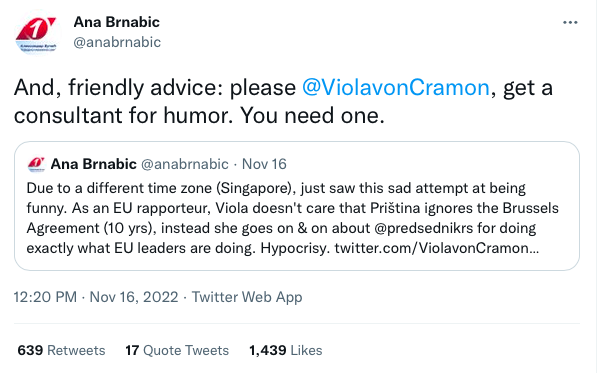 Von Cramon responded by slighting Serbia’s record on the rule of law and protection of human rights.

“We see that you have many humor consultants when you are preparing reports on the implementation of the rule of law and human rights standards,” she wrote.

This prompted Brnabic to respond by accusing EU institutions of failing to protect the human rights of Serbs in Kosovo, where the security situation has worsened dramatically following Pristina’s introduction of new rules requiring Serbs to re-register their cars and get number plates with the “RKS” (Republic of Kosovo) code.

“Yet again you show that "rule of law" & "human rights" are catch phrases for you - sound nice, mean nothing,” the Serbian prime minister wrote.

“Both are being brutally violated by Priština on your watch, with your support. Fortunately, there are people in the EU who, unlike you, actually believe in the rule of law & human rights,” she continued.

“I stop here. Arguing with hypocrites = not a good use of my time. Best of luck to you.” 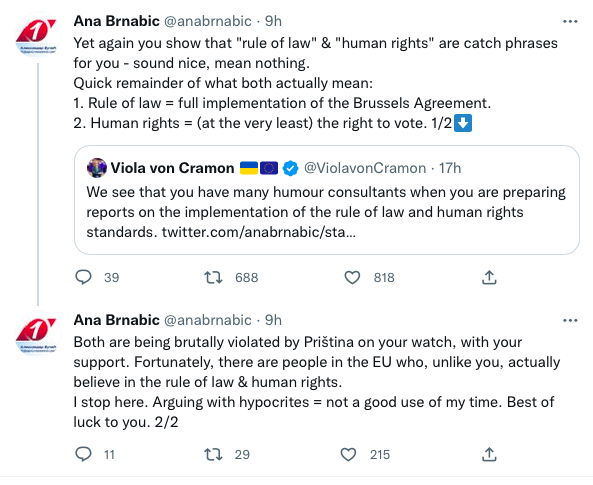 Von Cramon, along with other members of the European Parliament, has taken a tough line on Serbia over its relations with Russia.

After Serbia signed a foreign policy document with Russia on the sidelines of the UN General Assembly in New York in September, she suggested that Serbia’s EU accession talks could be frozen, "as entering the EU does not go through Moscow”.