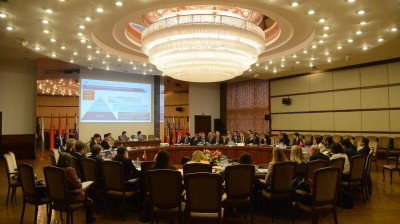 The international rating agency S&P Global upgraded long-term rating of International Investment Bank (IIB) to A- with a stable outlook on March 7.
By bne IntelliNews March 11, 2019

The international rating agency S&P Global upgraded the long-term rating of International Investment Bank (IIB) to A- with a stable outlook on March 7.

It was the fifth positive rating action for IIB since the beginning of 2018 from leading international rating agencies.

S&P underlines that the upgrade is based on a “moderate corporate risk profile and a very strong financial profile in accordance with renewed criteria of the agency” adopted within the framework of a revised multi-lateral development bank rating methodology.

IIB was founded in 1970 to foster economic cooperation between the COMECOM countries. Today it is a multinational development bank that includes Bulgaria, Cuba, Czech Republic, Hungary, Mongolia, Romania, Russia, Slovakia, and Vietnam amongst its members.

In February Hungary's Finance Minister Mihaly Varga and IIB chairman Nikolay Kosov signed an agreement to move the bank’s headquarters to Budapest from Moscow, where the bank will enjoy special diplomatic status as any other multi-lateral development bank.

S&P commended the move of the headquarters, which will, among others, open new opportunities for the Bank with regard to growth in the scale of activities, lowering of the cost of funding in the international capital markets and further expansion of shareholder structure.

Among other factors leading to the upgrade, S&P highlighted the completion of a corporate governance reform, an increase in the European share in IIB's paid-in capital, and the successful start of development strategy 2018-2022 implementation, S&P said in a press release.

S&P also highlighted the significant growth of the IIB's European member states' share in the loan portfolio and paid-in capital, corporate structure improvement due to an introduction of a three-tier governance system and a proportionate voting system on strategic decisions.

The bank is planning a new large-scale capitalisation programme by 2023 worth €200mn, while at the same time the bank’s non-performing loan (NLP) ratio fell to a record low of 2%.

According to S&P analysts the “very strong” financial profile of the Bank was due to the high level of capital adequacy and liquidity, as well as efficient funding operations.

The management has been improving its liquidity management by increasing A-AAA rated assets in the treasury portfolio. As of the end of 2018 the share of these assets reached 57% and IIB said they will increase to 65% by the end of 2020.

IIB also wants to make more use of the international capital markets for funding with a special emphasis on the diversification of geography, instruments and currencies.

“For the first time in its history IIB has become an institution with an average rating at an A level taking into account our ratings from Dagong, Moody’s and now S&P. It is a victory for our Bank and a vivid example of the successfully chosen strategy and efficient work of our international team,” Kosov said in a press release.

“I also have to underline key role played by our shareholder countries. Their constructive joint position and increasing support allowed us to take timely historic decisions crucial for long-term successful operations. IIB gains significance, strength and recognition in all geographies of its presence with each passing day. I am glad that our efforts received acknowledgement yet again.”