Russians' real disposable incomes fell to an eight-year low in 2020, but the outlook for 2021 is brighter 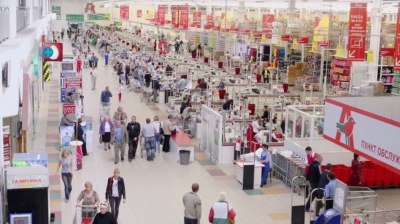 Russians' real disposable incomes fell to an eight-year low in 2020, but the outlook for 2021 is brighter / bne IntelliNews
By Ben Aris in Berlin March 28, 2021

Russians' real disposable incomes have fallen to an eight-year low as a result of the coronacrisis, declining by 3.5% in 2020, according to Rosstat, but the outlook for 2021 is brighter.

Real disposable incomes are down by more than 10% from their 2013 level, the last year of solid growth before Russia’s annexation of Crimea and a slump in world oil prices pushed the economy into recession, the Moscow Times reports. 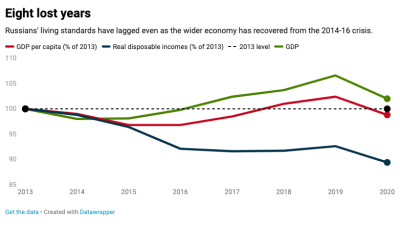 The standard of living has also been dragged lower thanks to Russian President Vladimir Putin's decision to modernise the army and to divert all Russia’s spare resources into that effort, which was launched in 2012. In effect Putin decided to sacrifice the relative prosperity that had been built up during the boom years in the noughties to strengthen Russia’s military so that it could face down the US. Russia annexed the Crimea two years later.

Since 2012 Russia has been running an austerity regime, long before the oil and sanctions shock hit in 2014 and the more recent subsequent crises. That has weighed on the broader real incomes (disposable income discounts mandatory payments like utilities, whereas real income is simply an inflation adjusted version of nominal income) that have been falling for more than six years, with a few brief respites.

Economists said the government’s limited – but well-targeted – anti-coronavirus (COVID-19) financial support helped soften the blow for the poorest families, although an extra 400,000 households fell below the poverty line last year, the RBC news website reported. The number of Russians now classified as living in poverty stands at 19.6mn.

The falling standard of living has been fuelling rising social tension, however, with Russian incomes still by far the highest in the Commonwealth of Independent States (CIS) and on a par with the lower end of EU members, but the situation is still not explosive.

With the military modernisation largely complete the Kremlin has turned its attention to restoring prosperity and in 2018 launched its 12 national projects that are designed to fix the problems with the economy and so should quell social discontent. Originally the national projects programme was supposed to be completed by 2024 in time for the next presidential elections, but as a result of the crises in 2020 the deadline has been pushed back to 2030.

The outlook for growth in both real disposable and real incomes has improved after Russia’s economy got through last year’s annus horribilis in relatively good shape and only a mild contraction versus the original expectations. GDP growth should return this year and higher than expected oil and commodity prices, which began recovering in November, mean the budget should record a modest 0.5% of GDP surplus this year as well as generating windfall revenues that can be spent on economic stimulus. In addition, the state has around RUB1 trillion ($13.2bn) in unspent budget funds left over from last year to add to the RUB21.5 trillion of budgeted spending for 2021.

Other economic data published March 25 also showed the economy continues to beat expectations, registering smaller declines in output than analysts had predicted. The official unemployment rate fell below 6%, although economists say that is probably more connected with the government reducing unemployment benefits than a surge in job creation, and the true rate of joblessness is likely significantly higher, reports the Moscow Times.

Construction and agriculture were the only sectors of the economy to register growth in 2020, Rosstat said as cited by the Moscow Times. Industrial production slipped by 2.9% in 2020. Retail sales slumped by 4.1% due to the nationwide lockdown last spring. Unsurprisingly, the consumption of paid services fell the sharpest, registering a 17.3% drop over the year.

All said and done, Russia’s economic contraction in 2020 is set to be among the world’s smallest, helped by the Kremlin’s rejection of imposing a second lockdown, even as virus rates, hospitalisations and deaths surged across the country. But the pace of Russia’s economic recovery is also set to be among the slowest as with the threat of new tough US sanctions looming over the Kremlin it maintains its austerity policy.

Russia’s CBR reserves down $43.7bn since the start of the war
17 hours ago
Industrial inflation exceeds 25% y/y in Moldova
18 hours ago
Romania’s construction companies post robust 6.5% growth in Q1
18 hours ago
Russians trade TV news for social media as war-weariness sets in
1 day ago
Net FDI in Bulgaria jumps four times y/y through March to €1.05bn
2 days ago