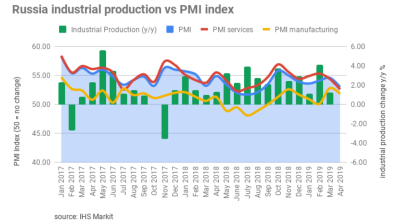 The IHS Markit Russia Services Business Activity Index posted 52.6 in April, notably down from 54.4 in March
By bne IntelliNews May 6, 2019

Russia's services sector posted a notable slowdown in April, as the May 6 report by IHS Markit showed the softest rise in services output since June 2018, while the rate of new business growth slowed down to a ten-month low.

Previously Services PMI consistently outperformed the Manufacturing PMI part of the report, pulling up the Composite Index of overall economic activity. But in April services failed to back up the manufacturing activity, which also slowed down.

The IHS Markit Russia Services Business Activity Index posted 52.6 in April, notably down from 54.4 in March. As reported by bne IntelliNews, the Manufacturing PMI posted 51.8 in April, down from 52.8 in March, but above the 50 no-change mark.

As a result, the Composite Output Index, the weighted average of the two, recorded 53.0 in April, down from 54.6 from March, with the implied rate of expansion the slowest since August 2018.

The slowdown in expansion in services in April was attributed by the panellists surveyed by Markit to softer demand conditions that weighed on growth. Where occurring, the upturn was supported by new client acquisitions and an increase in marketing activity.

While the expansion in new orders in the reporting month was modest in services, the sector saw a  sharp rise in new export business. The rate of growth was the strongest since data collection for the series began in September 2014.

Nevertheless, "despite a slower overall expansion in client demand, service providers recorded a stronger degree of optimism in future output growth," the report reads, with the business expectations at their highest level since July 2011.  The confidence of service providers was backed up by new product launches, forecasts of greater client demand and increased advertising.

Weak demand conditions in April were also underpinned by only a fractional increase in employment reported, with the slowest rise in workforce numbers since last October. "Some panellists noted that a slowdown in new business growth had reduced pressure on capacity," the report comments.

In the meantime, input cost inflation softened in April, while the rate of output charge inflation remained in line with that seen in March and its respective series trend. As a result, inflationary pressures eased across both manufacturing and services in the reporting month.

The weakness seen in April in the PMI indexes is in line with the first-quarter base sector statistics, which showed rather moderate results and had analysts hoping for a fiscal spending stimulus later in 2019 supporting the output.

"Consumption, construction output weighed in [in the first quarter]; agricultural production shows modest growth, while industry is the prime driver – mostly thanks to Oil and Gas," BCS Global Markets summarized the 1Q19 data on April 19.

"If it were not for the supportive crude oil price trend in 1Q19, Russia’s economy would have come to a standstill, not least due to the suppressed consumer demand and cuts to fiscal spending (defence procurements)," BCS GM argued, placing all hopes on infrastructure spending increasing in 2019.