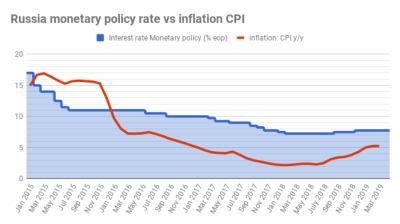 As expected the Central Bank of Russia (CBR) kept rates on hold at 7.75%, but analysts say it will cut them at least once and maybe twice later this year
By bne IntelliNews April 26, 2019

The board of the Central Bank of Russia (CBR) at the policy meeting of April 26 resolved to keep the key interest rate unchanged at 7,.75%, and allowed for the cut in the rate as soon as the second quarter.

The decision was largely expected by the market, all of the analysts surveyed by Bloomberg and Reuters unequivocally believed that it was too early for CBR to cut now, but expected a 25bp cut very soon.

A favourable start of 2019 reopened the window for lower interest rates. “Current levels of consumer prices growth is trending lower than the forecast,” CBR commented, admitting slow inflationary dynamics in line with expectations.

In the meantime, the regulator also gave the timeline of the possible rate cut, which it refused to do previously. Should the base scenario of the CBR stay on track, the cuts would be possible already in the second or the third quarter of 2019, the press-release read.

The main risk factors highlighted by the regulator are inflationary expectations that remain not anchored, as well as external factors such as risks of global economic slowdown, geopolitical factors that would lead to higher currency and inflation volatility.

The next board meeting in on June 14 and the CBR will be widely expected to cut the key interest by at least 25bp, should inflationary dynamics and consumer demand remains, economic growth shows no signs of overheating, and sanctions risks do not deteriorate.

VTB Capital said this week that at least two rate cuts are expected from the CBR this year, and while the meeting this week was much too soon for the rate cut as compared to the previous guidance, the monetary easing cycle could be launched in June.