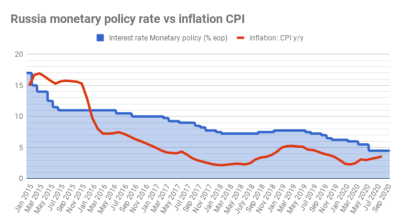 The board of the Central Bank of Russia (CBR) has resolved to maintain the key interest rate flat at 4.25% in its policy meeting of September 18. The economy is doing well, but the bank struck a conservative note due to rising geopolitical risks.

As reported by bne IntelliNews, since March the CBR has started a monetary stimulus cycle and cut the key rate three times from 6% by a total of 1.75pp. At the last meeting, the CBR made a cautious interest rate cut of 25bp in July, as inflation trended safely below the target 4%.

The decision to maintain the key rate flat was largely expected by the market. Domestic analysts previously surveyed by RBC business portal noted ruble weakness, a spike in geopolitical risks and slightly higher inflation in August as the main reasons for the CBR to put the easing cycle on pause.

In addition, the debate on state debt between the Finance Ministry (MinFin) and the CBR has recently been restarted, and the regulator might not be as eager as before to help the government out with monetary stimuli.

Emerging Markets (EMs) in general have been selling off over fears of a second and even third wave of the coronacrisis. Russia has seen mild selling of Russian Ministry of Finance ruble-denominated OFZ treasury bills but recorded a modest inflow in the week ending September 18, BCS Global Markets reports. With the MinFin intending to increase its borrowing, cutting rates again would make selling more bonds more difficult.

Analysts surveyed by Vedomosti daily reminded that CBR officials admitted that the inflation rate in August of 3.6% was higher than guided, which alone should be enough for the inflation-minded central bank to keep the rate flat.

The CBR indeed commented that inflation had outpaced the expectations, attributing this to fast recovery of consumer demand after the lifting of lockdown restrictions, as well as the ruble weakening due to increased geopolitical risks.

The political instability in Belarus and rising sanction risks for Russia after the poisoning of dissident Alexei Navalny have already affected the ruble exchange rate, bne IntelliNews reported.

Still, the CBR sees a prevalence of disinflationary trends in the medium-term perspective. The inflation outlook was maintained at 3.7-4.2% for 2020 and at 3.5-4% for 2021, with 4% reiterated as the main target.

The possibility of further interest rate cuts will be measured against compliance with the inflation outlook, the CBR wrote.

The CBR still has two more policy meetings after September, in October and December, but high uncertainty associated with the US presidential elections in November might leave the central bank with space for a rate cut only in December, the chief economist of Alfa Bank, Natalia Orlova, previously argued.