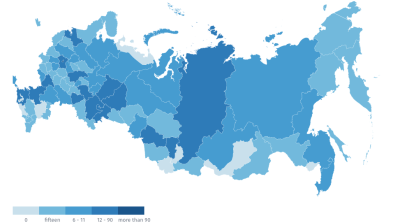 Russia’s Duma passed a law naming 1,151 companies as “strategic” that will entitle them to state help during the coronavirus (COVID-19) pandemic crisis.
By Ben Aris in Berlin April 30, 2020

Russia’s Duma passed a law naming 1,151 companies as “strategic” that will entitle them to state help during the coronavirus (COVID-19) pandemic crisis.

The names of the companies are a mix of state and privately owned and cover the whole country as well as most sectors.

The government has produced an interactive map that shows the geographical distribution of the companies as well as a downloadable list naming all of them.

Almost half of the companies on the list (523) fall under the purview of the Ministry of Trade and are involved in exports of a wide range of goods ranging from metals, to chemicals and on to textiles. Most of the major automotive producers are included from Avtovaz to Ford Sollers. Gold mines like Polyus Gold and heavy industry concerns like United Aircraft Corporation (UAC) are listed.

Many of Russia’s leading retailers made the list too, including German-owned Metro cash and carry as well as white goods chain M.Video-Eldorado.

A bit more than a third of the firms in the programme are based Moscow, where computers and online retailers feature prominently. All the famous tech companies are on the list including tech and e-commerce giants Yandex, Mail.ru Group, Wildberries, IBS IT Services and Kaspersky Labs.

But some less obvious retailers are included such as Detsky Mir for children's goods and the foreign owned Adidas sportsware firm.