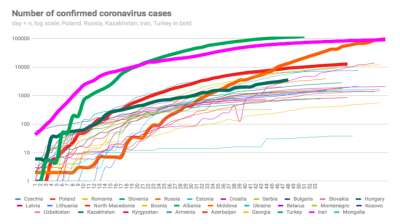 The number of coronavirus (COVID-19) cases continues to soar in Russia, which now has one of the fastest growing outbreaks of the deadly virus in the world.

The number of cases in Russia reached 114,431 as of May 1, according to data collated by the World Health Organisation (WHO) having increased by over 45,400 during the last week.

The epidemic and the lockdown imposed in the country are taking their toll. They caused an unprecedented collapse of the IHS Markit Russia Manufacturing Purchasing Index (PMI); the headline seasonally adjusted manufacturing PMI posted 31.3 in April, crashing from the 47.5 it posted in March as the full weight of the double blows of an oil price collapse and the virus-related stop-shock struck home.

This was almost as bad as the collapse of China’s manufacturing PMI to 26.5 in February from 51.8 in January during the worst part of its own outbreak – the worst result ever and the first time ever China scored less than the 50 no-change mark in the last 15 years. As bne IntelliNews reported, it is not clear if Russia will rebound as China did as the number of infections is rising unabated at the moment.

Russia’s budget will also be hard hit by the current crisis as GDP could contract by as much as 20% this year, leading to tax revenues drying up.

Numbers are still growing fast in Turkey, the site of Europe’s largest outbreak of coronavirus, and the worst across the emerging world, according to Capital Economics.

“Turkey has the worst outbreak in the emerging world but the authorities have remained steadfast in their refusal to impose draconian lockdown measures. Even so, there are growing signs of the scale of the economic downturn. Policymakers have made a concerted effort to prop up the lira but their ability to continue to intervene is limited and efforts to compress imports are beginning to shape up,” Capital Economics wrote in a report on the situation across the region.

In addition, the labour market fallout in Turkey could be far worse than elsewhere in emerging Europe, Liam Peach of Capital Economics said on April 28 in a research note. This risks pushing Turkey towards social collapse.

The number of cases in Belarus has also shot up over the last couple of weeks, reaching 14,027 as of April 30. Belarus now has emerging Europe’s third largest outbreak after Turkey and Russia.

To try and alleviate the impact of the crisis not the economy, Minsk is expected to secure a $2bn-2.5bn support package from multinational lenders. According to First Deputy Prime Minister Dmitry Krutoi, Belarus is currently in talks with the World Bank, the International Monetary Fund (IMF), the Development Bank of China, the European Investment Bank and governments of various countries with a view to getting financial support.

There are similarly large numbers of cases in Poland and Romania, yet the Polish government still plans to push ahead with the presidential election on May 10, albeit by postal vote. The opposition and public health experts warn this is likely to put voters and officials at higher risk of infection, while concerns have also been raised about the potential for fraud.

It’s a more positive story elsewhere in Central and Southeast Europe, where the coronavirus has largely been brought under control. In most countries only a few dozen new cases are being reported daily, while some have managed to get new cases down to single figures.

And Tajikistan — which previously claimed to widespread scepticism that it has no cases at all — has finally confirmed its first 15 coronavirus cases, the healthcare ministry said on April 30.

The authorities had insisted for weeks the country was coronavirus-free despite sharing borders with China and Central Asian nations that have been reporting coronavirus cases since March, and seeing the return of tens of thousands of migrant workers from Russia. Activists have lately questioned a sudden spike in cases of lethal pneumonia in Tajikistan, suspecting that the government might be covering up the presence of the virus in the country.

Turkmenistan is now the only country in Central Asia still claiming to be coronavirus-free.

Russia Services PMI bounces back to 47.8 in June, up from 35.9 in May
23 hours ago
Croatia to be among countries worst hit by tourism collapse this year, says UNCTAD
2 days ago
Russians, Serbians, Turks the biggest property buyers in Montenegro
2 days ago
Polish PMI advances but remains below 50 points as restrictions lifted
3 days ago
Czech PMI slightly up in June but still under 50-point threshold
3 days ago