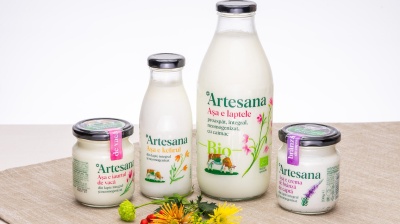 Romanian gourmet dairy Artesana will receive €5mn financing from CEC Bank, including a €2.7mn loan, a for new factory, while its rival Agroserv Mariuta in the same market segment will see its shares listed on the Bucharest Stock Exchange (BVB) after raising nearly €4mn in a private placement in exchange for 25% of its shares.

Still dominated by the major foreign groups such as Danone and Friesland, Romania’s dairy market is getting more sophisticated as purchasing power is rising quickly particularly in first tier cities, opening new opportunities for local brands that are capitalising on the “Made in Romania” trend induced by the pandemic particularly in the food industry.

Romanian entrepreneurial business Artesana secured a RON13.5mn (€2.7mn) loan from the state-owned CEC Bank, which is also providing a bridge loan worth €2.3mn for the period until state aid with the same value is disbursed, the Romanian company announced.

The financing will be used to build a new factory and buy modern equipment.

Artesana consolidated its shareholding base with the participation of ROCA investment fund, which has owned 20% of the business since the end of last year.

“We remain faithful to the Artesana mission to offer minimally processed artisanal dairy products, made from whole milk, not homogenised and pasteurised at low temperature, which preserves the nutritional qualities of milk," said Alina and Daniel Donici, the founders of Artesana.

Meanwhile, Agroserv Mariuta, another Romanian gourmet dairy producer, will start trading on the AeRO market of the BVB on May 21. The company is known on the market for its brand Laptaria cu Caimac.

In April 2021, the company carried out a private placement through which it sold 431,020 shares (nearly 25% of the total current shares) at a price of RON45 per share, which resulted in an ex-post valuation of RON77.9mn.

Agroserv Mariuta made the first step on the capital market in November 2020, when it carried out a private placement through which it sold euro denominated bonds, worth €3mn, traded since December 2020 on the BVB.

Agroserv Mariuta was established in 1994 and until 2018 had exclusively agricultural activities, growing crops wheat, barley, rapeseed, corn, alfalfa and other crops on an area of 3,000 hectares as well as runnng a dairy farm with over 2,500 animals.

In 2018, the company started a dairy factory, which involved an investment of over €5mn, and launched the Laptaria cu Caimac brand, under which it produces and sells milk packaged in glass bottles, matured cheeses, sour cream and yogurt.

Russia raises key rate to 6.5% amid strong inflationary pressure
7 hours ago
Erdogan’s relations with West in danger of renewed deterioration in ‘Varosha’ row
7 hours ago
Ukraine makes surprise policy rate hike to 8% to fight inflation
13 hours ago
US court rules Kyrgyzstan in contempt for pushing ahead with local legal action against Kumtor Gold
16 hours ago
Turkey extends 'undeclared state of emergency'
23 hours ago