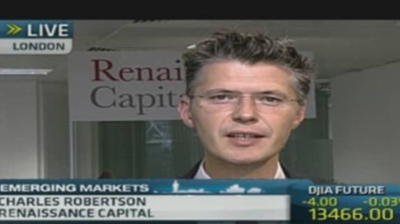 Charles Robertson says Turkey is back on a worrying road.
By bne IntelIiNews March 8, 2021

In an interview with Bloomberg, Robertson said: “My current scenario is that we go back to another boom-and-bust cycle, with interest-rate cuts in the second half of this year leading to strong credit growth in 2022, just ahead of the presidential election in 2023, and then we get another crash.”

He added: “We have seen so many times that [Turkish President Recep Tayyip] Erdogan was persuaded that he has to do something. Each time, the cost has become higher and the gains have become more short-lived. You look at interest rates globally today and look where Turkey is. Every other mainstream emerging market has interest rates below 5% now, except Turkey.

“I don’t have high trust that Erdogan has learned his lesson. His comments just a week ago again suggests that, yes, he is being responsible for now, but as soon as he gets the chance and certainly ahead of the elections in 2023, you would expect Turkey to go on the credit-growth model again.”

Robertson also said: “Once again Turkey has got a choice. It still has a very cheap currency; it can go down an export-led model that will support its current account and bring in the dollars and euros that can be used for investment. I’d love to see the central bank be able to take inflation under control permanently through a long period of high interest rates and at the same time a cheap currency helping exports and helping re-balance Turkey’s economy away from consumption. That would be the better long term story for Turkey, but less exciting for growth. It is kind of a growth scenario of probably 3% or 4% a year, not 6% or 7% for a few years and then a crash.”

Reflecting on his outlook for Turkey, Robertson said: “I’d love to be wrong, for the sake of the Turks and their savings and their relative standing in the world. Turkey has an opportunity to change. Turkey is a well-developed industrial economy with a good, educated work force. It could be a solid—perhaps the best—growth story in the European time zone for the next 10 years with the right policies.”