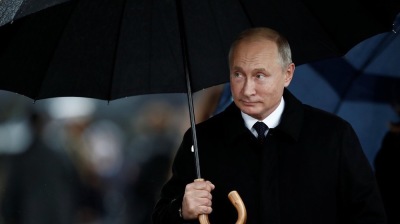 Russian President Vladimir Putin ridiculed green energy during a speech in Sverdlovsk, Russia’s dirtiest region, asking if anyone cares about the worms and birds that are killed by wind turbines.

“Everyone knows that indeed wind power generation is good, but does anyone remember about birds in this case? How many birds die?” Putin said in a keynote speech at the Global Manufacturing and Industrialisation Summit. The wind turbines “shake so much that worms get out from the soil!” he said in the industrial city of Yekaterinburg, the capital of the Sverdlovsk region. “Will it be comfortable for people to live on the planet with a row of wind turbines and covered with several layers of sun batteries?”

The comments were widely lampooned and held up as evidence of the Kremlin’s two faced attitude to the environment, an issue it has used to wrest control or punish companies in the past.

Sverdlovsk is home to the world’s biggest titanium producer, and is also one of the largest sources of copper and steel products. Thanks to its Soviet legacy Russia has some extremely polluted cities where major metal and mining works are located, although the owners of these faciliites have begun to clean up the worst in the last decade.

They have to. Last year Norilsk Nickel in Russia’s far north lost a third of its western portfolio investors who dumped the stock, not because it was not a money maker – Norilsk has been a market outperformer in the last two years – but because the company is a heavy polluter. As bne IntelliNews reported in this month’s cover story, environmental, social and governance (ESG) is becoming a major concern for Russian companies as funds begin to look for not just profitable companies but ones with a long-term sustainable business strategy.

The environment has also become a political issues after a string of protests against growing landfills close to urban areas unsettled the Kremlin. While Russians have largely ignored the purely political rallies led by the likes of anti-corruption blogger and opposition activist Alexei Navalny they have been passionate about local issues that directly affect their lives. The landfill problem has been particularly evocative.

Putin may have been condescending in his speech in Yekaterinburg but the issue occupied a large slice of his recent annual phone-in. Moreover, the Kremlin has set up a national waste disposal company and is now investing heavily in improving the collection of trash. In parallel Moscow is about to introduce rules that will force residents to separate their rubbish for recycling in a historic first for Russia.

The environment is a touchy subject in Russia. Large protests over environmental issues in the Baltics turned political and started the break-up of the Soviet Union.