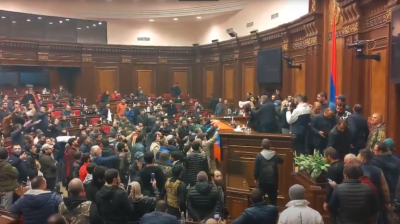 There were scenes of chaos as protesters stormed government buildings in the Armenian capital of Yerevan from late on November 9 after Prime Minister Nikol Pashinian conceded defeat in the war over Nagorno-Karabakh with Azerbaijan.

Pashinian’s announcement, which he said was an “incredibly painful” decision for all Armenians, came hours after Azerbaijan posted video footage which appeared to confirm its forces had captured the Nagorno-Karabakh city of Shusha (a mountain citadel called Shushi in Armenian).

Outside on the streets, a crowd caught up with Ararat Mirzoyan, the speaker of Armenia’s Parliament. He was brutally beaten up by an angry mob.

The details of the settlement that started to emerge on November 9 showed Armenia conceding large amounts of territory to Azerbaijan.

“This is the approximate sketch map of proposed territorial concessions in Nagorno-Karabakh conflict zone suggesting the surrender of significant land by Armenia. Nagorno-Karabakh will keep control of the green areas plus the Lachin corridor. Everything else must be surrendered to Azerbaijan,” tweeted IHS Markit political analyst Alex Kokcharov. 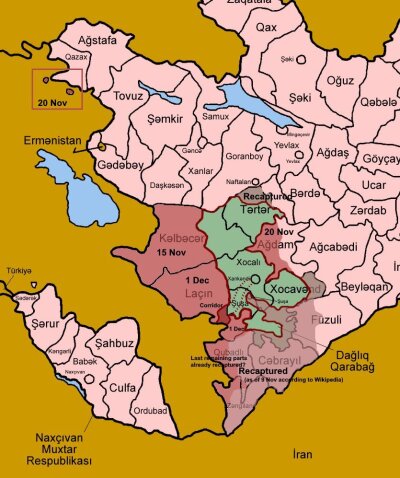