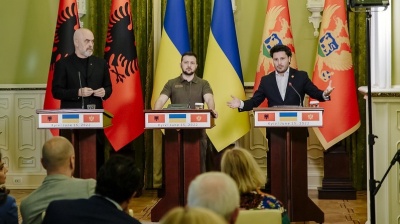 The prime ministers of Albania and Montenegro, Edi Rama and Dritan Abazovic, visited Kyiv on June 15, where they met Ukrainian President Volodymyr Zelenskiy and expressed their support for Ukraine and its bid for EU candidate status.

Both Albania and Montenegro are Nato members and EU candidate states. While their small size means their financial help has been limited, they have strongly supported Ukraine since the Russian invasion, joining EU sanctions against Russia.

The three leaders spoke at a joint press conference in Kyiv, while Rama and Abazovic visited bombed areas in Borodyanka and Irpin, as well as the exhibition displaying evidence and testimonies of the Russia-Ukraine war.

It was initially reported that North Macedonia’s Prime Minister Dimitar Kovacevski would accompany Rama and Abazovic on the trip, but he was unable to take part and instead addressed the other leaders by video link.

At the press conference, Zelenskiy thanked the Western Balkan prime ministers for their show of support in visiting Kyiv.

“This meeting today is a testament to the support for Ukraine by the prime ministers and their countries for Ukraine, for its territorial integrity, its sovereignty and for our cause for full membership in the European Union, and what is more and, most importantly, the need to hold all Russian perpetrators accountable for everything they have done against Ukraine on our soil and against Europe, as well as for the negotiations,” he said.

With a critical EU Council meeting coming up next week, much of the discussion centred on the three countries’ prospects for EU accession.

The EU Council meeting at which EU members are due to decide whether to give candidate status to Ukraine, Georgia and Moldova is approaching on June 23-34. The same meeting will show whether EU leaders have made any progress in persuading Bulgaria to lift its veto on North Macedonia stating accession talks, which would also unblock Albania’s progress, as the two countries are coupled together.

Also on the agenda will be the French presidency’s proposal for a “European political community” binding together the European states that are not members of the EU.

Zelenskiy raised this in his address to the press conference, talking of the need to "avoid every grey area” in Europe.

"Our countries, Ukraine, Montenegro, Albania, North Macedonia, must become full members of the European Union and we agree that our countries are not rivals in this European journey, but they complement their efforts and opportunities,” he said.

“Today we meet on the eve of a historic European meeting that will take action, will adopt decisions on Ukraine's European perspective. This will be crucial for the future of Europe.”

Abazovic made a similar point, saying that after February 24 – the day Russia invaded Ukraine – “we are in a completely different position and it is the final moment to understand that we should not leave black holes in Europe ... Today is Ukraine, tomorrow may be for another country, the day after tomorrow may be in the Western Balkans. So the idea is to try to move forward to keep the enlargement process alive and to foster and promote more solidarity, to make the European family bigger and bigger.”

Rama told the press conference that he and Abazovic “are here to express our full support for your idea and your request on behalf of the Ukrainian people for the European Union to grant Ukraine the status of a candidate country.”

However, he also raised the issue of Albania’s slow progress, alluding to “the fact that the European Union has not kept its word to us” – referring to Albania’s failure to start accession talks despite fulfilling conditions set by EU members.

“Of course, we are not happy with the EU and this is no secret, but in the meantime we are fully committed to the European journey,” he said.

He warned that afte getting EU candidate status, "the next day the sun does not rise earlier". However, he stressed: "Candidate status is an important recognition of where you belong and Ukraine belongs to the European community of values ​​and principles that we all share. It is Ukraine's right to ask to be part of it and we believe, I believe it is Europe's duty to respond to these demands."

Speaking personally to Zelenskiy, Rama said what the Ukrainian president is doing in defending Ukraine "is not just something you naturally owe to the Ukrainian people and the country as their president ... what you are doing is something that you do not owe, but you are doing it for the values ​​and basic principles of living in peace, on earth and for all of Europe."

Abazovic talked of Ukraine’s role in fighting to “defend the democratic values ​​of Europe”.

“You are not only fighting for your territory, for your people, but you are fighting for the principles and for the way of life, for the opportunity to choose your destiny for the future,” he said.

“This is a very difficult time for Europe, it is a very difficult time for the world and I think what is most important and we shared this experience in the morning, is to stop the war. Everything else is less important. We need to find a way how to stop the war, how to stop the mass destruction of infrastructure, people's homes, killing people and after that you will certainly have the full support for rebuilding your country,” he said. “We do not have a lot of capacity, true, we are small countries, but nevertheless we will give our contribution.”