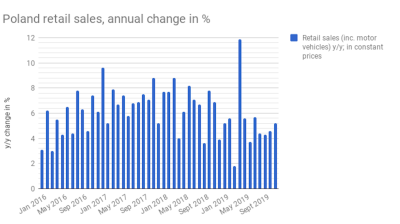 The reading marks a gain of 0.6pp in retail turnover growth in comparison to the y/y expansion recorded in October. The expansion continuing in November is hardly a surprise. Poles’ robust consumer spending is driven by the good situation on the labour market, low unemployment and growing wages in particular.

The Law and Justice (PiS) government also expanded its flagship programme of monthly child benefit of PLN500 (€114) to encompass virtually all children in Poland. That also had an effect on consumption although analysts expect that to wither in 2020.

PiS’ social spending also did not translate into securing political domination in the November 13 election.

Driven by consumption, Poland’s GDP growth came in at 5.1% y/y in 2018, the fastest expansion in over a decade. The economy slowed down its growth to an unadjusted 3.9% y/y (4% y/y upon adjustment) in the third quarter – still a show of resilience amidst the worsening of the external environment.

Sales of food, drinks, and tobacco products was one of the segments to see turnover decline, at 0.1% y/y, data also showed. Sales in the “other” category were the other segment to disappoint with a fall of 0.4 % y/y.

In monthly terms, retail sales fell 2.4% in constant prices after expanding 7% in November.

In current prices, retail sales grew 5.9% y/y in November versus an expansion of 5.4% y/y in October. In monthly terms in current prices, there was a fall of 2.3% that followed a gain of 7.4% m/m in the tenth month.