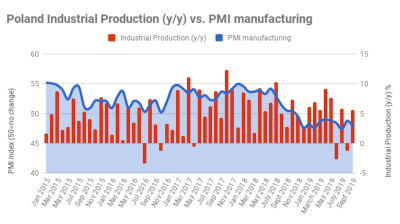 The September rebound is in line with market expectations due to the calendar effect of more working days in comparison to August. But the recovery of industrial output was more fundamental, as production growth also accelerated in seasonally-adjusted terms, Bank Millennium noted.

Earlier predictions for a still slower expansion of about 3.5% – because of sluggish Germany and the reduced activity in the Eurozone in general – had to be revisited after the PiS government announced a multi-billion fiscal stimulus programme in late February.

In adjusted terms, industrial production grew 3.5% y/y in September, compared to 1.7% y/y in the eighth month.

Broken down by sector, output in manufacturing grew an unadjusted 5.7% y/y in September, compared to a fall of 1.3% y/y the preceding month.

Output also expanded 2.2% y/y in the mining and quarrying sector after retreating 8.4% y/y in August. In the utility segment, production grew 3.9% y/y after declining 0.3% y/y previously.

Production also grew in the water supply and waste management segment, where growth came in at 9% y/y in the ninth month, compared to an expansion of 6.6% y/y in August.

“The sector outlook remains negative. In [the third quarter] overall production expanded 3.4% y/y, 1.4pp lower than in [the second quarter],” ING said in a comment on the GUS reading.

“The biggest risk is linked to the German and Eurozone slowdown, especially if a potential recession hits these labour markets and so consumption. For producers focused on the local market, energy-intensive sectors such as metallurgy and activities related to construction are at greatest risk,” the Dutch bank also said.