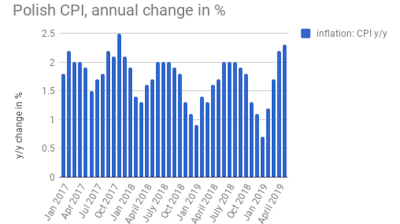 The pick-up is slightly below consensus but broadly in line with projections of CPI growth to accelerate in 2019, possibly until August. The fast-rising wages, recovering food prices, and a hike in core inflation are all having an impact.

However, notes ING, the moderate acceleration of price growth in May and the subdued reading of core inflation – at 1.7% y/y in May, compared to 1.6% y/y the preceding month – point to stabilisation of the CPI in the months to come.

That will likely push Poland’s Monetary Policy Council (MPC) back to more dovish positions later this month when another rate-setting meeting takes place.

Polish interest rates have lingered at a record low of 1.5% for over three years now. There is little to indicate the MPC could consider any changes this year at least.

“CPI should remain slightly below the central bank's target of 2.5% in June and July. In the second half of the year, we expect a deceleration, with CPI oscillating between 2% y/y and 2.5% y/y,” ING said in a comment on the GUS figures.

“The increase of core inflation is likely to be offset by lower food and fuel prices. These volatile categories should lower overall CPI as well,” the Dutch bank added.

Following the acceleration of price growth in recent months, the overall consensus has now shifted for CPI to exceed 2% in 2019 – but not the central bank’s target of 2.5%.

Broken down by main segments, growth in prices of food and non-alcoholic drinks drove CPI expansion in May, expanding 5% y/y. Prices of fuels for private means of transport moved up 4.1% y/y. Prices of energy retreated 0.9% y/y.

In monthly terms, CPI edged up 0.2%. Prices of food and non-alcoholic drinks grew 1.4% m/m. Prices of fuels for private means of transport added 1.2% on the month while prices of energy fell 0.1% m/m.