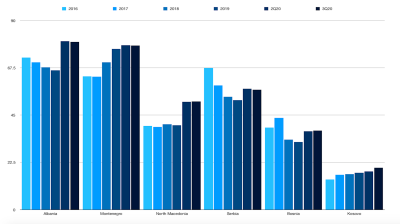 Albania’s became the country in the Western Balkan region with the highest public debt-to-GDP ratio in the third quarter of 2020, overtaking even Montenegro, whose high debt ratio has long been cause for concern.

Debt grew across the region – and indeed in many countries worldwide – as the coronavirus (COVID-19) pandemic forced governments to raise public spending while experiencing a fall in tax revenues.

GDP continued to be well down on 2019 levels in the third quarter, showed data compiled on the EU accession countries by the European Commission, even though the situation improved compared to the second quarter, with regional GDP down by only 4.5% on the year.

“Large-scale fiscal support to households and companies to combat the adverse impact of the crisis, combined with a sizeable drop in revenues, resulted in a sharp rise in budget deficits in the first eleven months. Along with a fall in GDP, this led to substantial increases in the public debt-to-GDP ratio in all countries compared to end-2019,” it added.

“The adverse impact of the COVID-19 crisis on fiscal balances intensified in the third quarter and over the autumn. In all countries in the Western Balkan region, the government deficit widened sharply, as crisis-related spending increased and tax revenues dropped further,” it added.

Earlier in January, Minister of Finance Anila Denaj defended the increase in the country’s debt during the pandemic year, saying that the country would continue on its fiscal consolidation path. Denaj pointed out at a press conference that Albania faced not only the coronacrisis, which had forced countries around the world to take on debt, but also a serious earthquake at the end of 2019 that had caused widespread damage.

The finance minister also pointed out that Albania will return to its fiscal consolidation path post crisis.

Like many other countries from Central and Southeast Europe, Albania successfully issued "corona bonds" in 2020, selling a seven-year Eurobond worth €650mn, with a coupon rate of 3.65%, in June. The issue was aimed at refinancing previous debts and covering the government's financial needs.

In Montenegro, the public debt-to-GDP ratio had been rising pre-COVID, despite efforts by the government to rein in public spending after concerns were raised about the high level of indebtedness to China, which is financing the highly expensive Bar-Boljare motorway.

Montenegro’s debt increased in the final month of 2020, when the government used a €750mn Eurobond – equivalent to 16% of GDP – which Finance Minister Milojko Spajic said meant Montenegro was “saved from bankruptcy”.

In Serbia too, the crisis has taken a heavy toll on public finances, deteriorating strongly the fiscal balance as a result of revenue shortfalls and expenditure increases,” said the report. “Thus, while partially recovering the lost ground in the second half of the year, total revenue was still lower by 1.8% year on year in January to November 2020, particularly negatively impacted by lower receipts from non- tax revenue (-6.8%) social contributions (-2.2%), and corporate income tax (-4.0%).”

Kazakhstan manufacturing PMI posted 48.5 in February, as the rate of decline eased thanks to an increase in new orders.

The index’s expansion strengthens the outlook for recovery in Poland’s manufacturing sector in 2021.

Serbia had one of the smallest GDP contractions across the emerging Europe region in 2020.

Fourth quarter slowdown was significantly lower than during the first wave of the pandemic, despite worse epidemiological data.

The headline seasonally adjusted IHS Markit Russia Manufacturing PMI put in its strongest growth since April 2019 after registering 51.5 in February, up from 50.9 in January, signalling a marginal improvement in the health of Russian manufacturing.