Online is in vogue in Romania 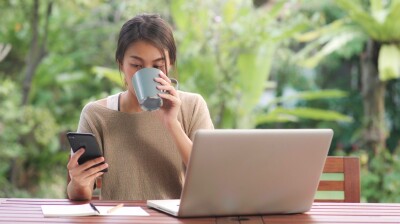 Sales by online retailers in Romania gained a big boost from the coronavirus (COVID-19) pandemic in 2020. While sales through e-commerce sites haven’t yet reached those of major retailers, they made considerable gains during the year.

Fashion retailers took a hit at least initially as people changed their buying habits, stocking up on food, and buying items to see them through the lockdown like laptops, crafting materials and home exercise equipment. Yet despite the dip in clothes purchases in the early days of lockdown, online fashion retailers in Romania and elsewhere have reported a sharp jump in sales in 2020.

This has contributed to Romania achieving the fastest increase in retail sales over the five-year period from 2015 to 2020, during which time the number of Romanians who shopped online more than doubled, according to a Eurostat survey. Despite this, Romania still has the second-lowest level of online retail purchasing in the EU (after neighbouring Bulgaria), as just 45% of Romanians said they had shopped online in Eurostat’s 2020 survey. 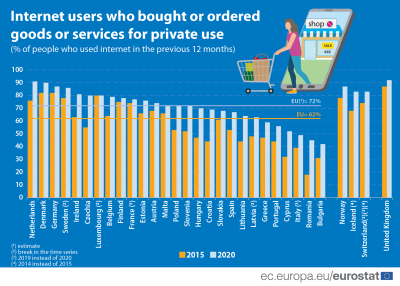 As elsewhere, the spread of the coronavirus (COVID-19) in Romania and the lockdown in spring 2020 led to a sudden increase in online sales as non-essential retailers were forced to shut and people stayed away from bricks and mortar stores out of fear of infection.

Among the online retailers that benefitted as non-essential bricks and mortar shops were forced to close were Fashion Days, the fashion arm of Romania’s top e-commerce site eMAG. Fashion Days achieved revenues of RON510mn (€105mn) in 2020, a 60% year-on-year increase, the company’s general manager Robert Berza told Profit.ro. Fashion Days and eMAG Fashion together posted total net revenues of one RON690mn, the third highest in the Romanian market after international fast fashion giants Inditex (whose brands include Zara) and H&M.

Fashion Days aims to become the leader on the Romanian market within three years, Berza told Profit.ro. In a separate interview with daily Ziarul Financiar, Berza said there had been “exponential” growth in customer migration from shops to online during the pandemic. He forecast that online sales could thus reach 25% of the fashion market in 2021 from 10% pre-pandemic.

The company’s rivals include Answear, a Poland-based online retailer that has expanded across the region and is considering an IPO on the Warsaw Stock Exchange. Answear reported a 35% y/y increase in sales in the first half of 2020, with turnover exceeding €10mn. In line with the industry trend, Raluca Radu, country manager Answear Romania, told Ziarul Financiar the company saw an initial dip in sales when the lockdown was introduced, followed by an uptick as Romanians turned to online purchasing.

Also active on the market is German tech unicorn, online fashion retailer About You, which launched in Romania in October 2019. Its first year went better than expected, with the company announced in October 2020 that it had sold 3mn items to more than 600,000 customers, achieving revenues of €100mn.

“We’re very happy that the first year was so successful. We definitely see much potential for the future and aim to become clear market leader for online fashion on the Romanian market. We will continue to adapt our shop to local preferences, expand the assortment, further increase the service level and continue to innovate with new features, local events and collaborations,” said Tarek Müller, co-founder and co-CEO of About You, quoted by local media, on the anniversary of its Romanian launch.

Another new entrant to the market in July 2020 was ING Bank, the fourth-largest bank by assets in Romania, which launched the online shopping platform DealWise, aiming to compete with the likes of Fashion Days and Answear.

The figures announced so far by online fashion retailers show they are catching up with the big fast fashion brands, though they aren’t there yet.

H&M, for example, achieved revenues of SEK2.1bn (€210mn) in the first 11 months of 2020, down from SEK2.6bn in 2019. Faced wth strong competition on top of the temporary closure of its stores, H&M announced in May it was expanding the websites for brands including Arket, Cos and Monki in nine European markets, including Romania.

Local fashion chain Miniprix, which had eight stores in the Romanian capital Bucharest at the start of the pandemic, also moved swiftly online when its stores were forced to close. Not only that, but the family-owned retailer moved into an entirely different segment of the market, opening up Minimarket grocery stores. When the lockdown eased, the move online had been so successful that Miniprix decided against re-opening two of its stores as it moved its emphasis to online sales, according to e-commerce platform provided Vtek which supported the project.

The shift to online fashion retailers, and the scramble by some major mass market retailers to up their online game is part of a global trend. People didn’t stop buying clothes during the pandemic, though they changed what they bought, with sales of loungewear and easy garments like throw-on dresses rising, while workwear and eveningwear purchases fell.

Berlin-based online fashion giant Zalando reported a 28.6% increase in the number of orders in the 2Q20 compared to the same quarter of the previous year, as well as a 27.4% y/y increase in revenues. This trend continued into the third quarter, despite the easing of lockdowns across Europe.

Amid this international trend, Romanian analysts are bullish about the future for the country’s online retail segment. A report from Bucharest-based Tuya SEO & Digital Marketing estimated the country’s e-commerce sector would grow 30% y/y in 2020 to reach €5.5bn amid an 8% increase in the number of online shoppers. Fashion is the largest segment of the online market with a projected market volume of $943mn in 2020, said the report.

“The major breakthrough comes in the context of the COVID-19 pandemic … e-commerce has kept the Romanian economy open and moving throughout the pandemic,” says the report.

“Many Romanian companies, but also many Romanian entrepreneurs who relied exclusively on a physical presence, realised the advantages of the online sector, so they shifted to e-commerce during this year.”

Another report, by iSense Solutions, expects an even bigger rise of 40% to €6bn in 2020, and a 13% increase in the number of Romanians shopping online.

“The COVID-19 pandemic had a significant impact on the market and shopping habits and was an opportunity to increase online shopping,” says the report. iSense’s survey revealed that 43% of respondents said they feel uncomfortable shopping in traditional stores because they are too crowded (71%) and do not adhere to social distancing rules (68%).

According to the report, the top 10 online stores and shopping apps in the fashion category are: online retailers eMAG, Fashion Days, About You and AliExpress; fast fashion retailers H&M and Bershka; local retail chain Miniprix; and European supermarket chains Auchan and Carrefour.

Romania’s public debt-to-GDP ratio up 12.4pp y/y to 47.7% at end-2020
Romania expects to get €720mn from sale of 5G licenses this year
Emerging Europe strong on women’s economic opportunities but dragged down by low pensions

Trees are one of Russia’s biggest natural resources – its “green gold.” Russia's forests stretch half way around the world and it is home to 70% of the planet's entire stock of soft wood – ideal for making paper