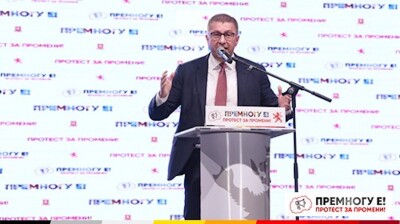 Several thousand supporters of the biggest opposition party in North Macedonia, VMRO-DPMNE, held an anti-government protest in Skopje on June 18 seeking an early election due to their deep disappointment with the work of the Social Democrat government.

The conservative opposition has accused the government of PM Dimitar Kovacevski of being incapable of tackling crime, the energy crisis, rising inflation, poverty, the poor healthcare system, scandals, selective justice and pursuing a bad foreign policy.

The protest in front of the government building was held under the motto “It’s too much”.

“This is a voice against injustice and poor living conditions and the changes must come,” VMRO-DPMNE leader Hristijan Mickoski said at the protest.

The country has been facing a series of prices hikes, which caused the annual inflation to reach nearly 12% in May with food and non-alcoholic drinks prices jumping by over 17.1%.

Several trade unions are also seeking wage hikes due to the worsening living standard amid unstoppable inflation. The average wage in the country is about €500.

Mickoski also criticised the government over its foreign policy.

“Instead of a date for the launch of EU accession talks, we get humiliation, shame and betrayal,” Mickoski said.

North Macedonia has been an EU candidate since 2005, but has not started the EU accession talks yet due to various obstacles from its neighbours. The latest one is the Bulgarian veto. Sofia is vetoing the start of EU accession talks with Skopje over language and history issues and also wants other demands to be met.

North Macedonia’s government said that the identity and language issues are not negotiable.

Mickoski criticised Prime Minister Kovacevski and the government for being silent about the latest French proposal for a EU negotiating framework sent to Bulgaria for approval.

Regarding the French proposal for resolving the dispute with Bulgaria, Mickoski said that it is "Bulgarisation of [North] Macedonia in installments".

He also sent a message to official Sofia saying that with its policy towards Skopje it is "irreversibly distancing" the two nations.

“As long as I am president of VMRO-DPMNE, the constitution will not be changed to meet Bulgarian demands," Mickoski said at the protest.

Amonth other demands Bulgaria is seeking ethnic Bulgarians, which accounted for less than 0.2% of the population, according to the latests census, to be included in North Macedonia's constitution.

“Neither I nor VMRO-DPMNE will accept a humiliating agreement to the detriment of the national interests. If the government decides to adopt the agreement without parliament's approval, then the future VMRO-DPMNE government will not respect any point of it," Mickoski said.

Mickoski also warned of a complete blockade of the parliament, the streets and institutions if there is no deal with the ruling SDSM on an early election.

In the meantime, Kovacevski and his coalition partners held a meeting at which they agreed that there is no need for snap elections as they believe that elections will not solve the problems but will deepen them.

Kovacevski did not comment on the French proposal for resolving the dispute with Bulgaria.

"We will not comment or talk because it has not yet been harmonised by the EU member states," Kovacevski said, adding that he would state his position after Bulgaria takes a stance on it.

About two months ago, Mickoski urged Kovacevski to hold a meeting and talk about an early election, but Kovacevski rejected the proposal. After that VMRO-DPMNE started to obstruct the work of the parliament.

The EU summit due on June 23-24 is crucial for North Macedonia’s EU perspective as Bulgaria is under strong pressure to lift the veto due to the new geostrategic circumstances with the war in Ukraine. French President Emmanuel Macron, whose country is the current holder of the EU presidency, sent a proposal to Bulgaria asking the country to lift the veto, but not many details are known.