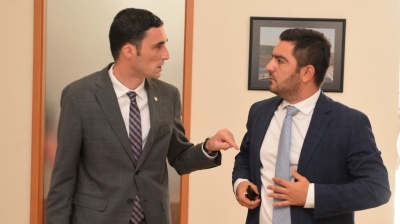 Kosovo's Minister of Trade and Industry Endrit Shala and the Minister of Economy of North Macedonia Kreshnik Bekteshi hold an animated discussion on trade barriers.
By bne IntelliNews August 20, 2019

North Macedonia’s Economy Minister Kreshnik Bekteshi said on August 20 that Kosovo has agreed to provide all needed guarantees to prove that its fish exports are safe for consumers. Afterwards Skopje will lift its ban on imports of fish from Kosovo.

The statement came after Bekteshi visited Pristina where he met Kosovo's Trade Minister Endrit Shala in a bid to resolve the trade dispute which emerged in June when North Macedonia banned imports of fish and roe from Kosovo due to incomplete documentation on fish health status. The dispute deepened after Kosovo decided last week to impose a ban on imports of potatoes and honey from North Macedonia as a reciprocal measure.

“By the end of the week or early next week, the Food and Veterinary Agency of Kosovo should send a report to North Macedonia, with monitoring programme of the roe and fish stocking material,” Bekteshi said, according to the government statement.

Then North Macedonia's authorities will conduct appropriate checks and will decide if imports will be allowed, he said, adding that Kosovo’s side has accepted North Macedonia’s facts and arguments.

Shala said after meeting Bekteshi that his country's Food and Veterinary Agency had agreed to submit additional guarantees to North Macedonia even though Kosovo has not had to meet such obligations with other CEFTA signatories.

Bekteshi reaffirmed that the measure was taken in line with EU requirements and in order to protect consumers by ensuring appropriate control of the health status of imported products.

Bektashi also said that the measure was not undertaken only for Kosovo, but for all countries that do not have a monitoring programme for fishery products.

After Skopje lifts its ban on fish imports, Kosovo will revoke its decision to ban the import of potatoes and honey from North Macedonia.

North Macedonia currently does not import fish from any neighboring countries except Kosovo, and most of its imports come from European Union countries, especially Denmark and the Netherlands.

Serbia is losing €1.39mn per day from the import tariffs imposed by Kosovo, Trade, Tourism and Telecommunications Minister Rasim ... more

Kosovo’s President Hashim Thaci said on January 6 he has given the leader of Vetevendosje, Albin Kurti, 48 hours to ask for a mandate to form a new government in order to avoid a constitutional ... more