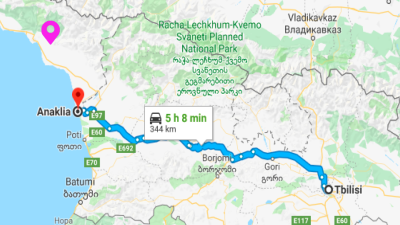 Map showing distance between Anaklia port and Tbilisi. Poti can be seen slightly south of Anaklia.
By Iulian Ernst in Bucharest and Will Conroy in Prague May 30, 2019

Georgia’s flagship infrastructure investment, the $2.5bn Anaklia deep-water port project, is “on the verge of stopping”, Mamuka Khazaradze, one of the two principal partners in the consortium behind the project and a co-founder of the country’s TBC Bank that has lately faced a probe mounted by prosecutors, warned on May 30.

With the fates of Anaklia port and FTSE-250-listed TBC having become entwined, it is high time to lay out the facts so far. Make of them what you will.

Khazaradze released a statement on Facebook from the Anaklia Development Consortium (ADC), backed by Georgian and US investors among others. It cautioned that the future of its project was in trouble because, in a “shocking” move, Georgia’s ministry of economy and sustainable development is to issue a permit for the construction of a rival deep-water port in Poti, a location a little further south than Anaklia on the country’s Black Sea coast.

As this year got under way, news broke that TBC Bank was being investigated for alleged “illegal income” activities dating back 11 years. The Office of the Prosecutor General (POG) of Georgia announced its investigation, prompting Khazaradze’s lawyer Zviad Kordzadze to state: “The rumors about money laundering are nonsense. The operation [subject to the probe] was absolutely open and transparent.”

Suggested links to Ivanishvili
The move against TBC prompted some opposition politicians to speculate that it might be linked to Bidzina Ivanishvili—Georgia’s richest person who is a former prime minister of the country and the chairman of the ruling Georgian Dream party. Many observers describe the entrepreneur-politician as Georgia’s de facto leader.

Local news outlets including JAM and BPN looked at how Georgian-Russian dual national Ivanishvili appeared to be displeased by Khazaradze developing Anaklia deep-water port—seen as Georgia’s most important project—with the support of another former PM, Giorgi Kvirikashvili.

Gigi Ugulava, one of the leaders of the parliamentary minority party European Georgia, meanwhile, was quoted by Georgia Today as saying: “[The co-founders of TBC Bank Group including] Khazaradze were trying to get on well with Ivanishvili before but it did not work out… We see business cannot breathe freely.”
However, Georgian Dream MP and vice speaker of parliament Gia Volsky told the publication that he rejected the idea that political motives featured in the TBC case. “It is impossible to blame such a huge financial institution [for such activities] so groundlessly,” he said.

Permit move ‘concealed’
In its statement expressing its shock at the decision to award a permit for the rival port development, the ADC said officials had for some weeks concealed their decision to agree to Poti. The Anaklia investment would be suspended if the government did not react in a sensible way to ADC’s response to the issuing of the permit to a rival, it added.

The order to provide the Poti permit was issued on May 2, the ADC noted—but on May 21, without revealing the Poti authorisation, the government went ahead with negotiations with the Consortium of International Financial Assistance (formed by the European Bank for Reconstruction and Development (EBRD), Asian Development Bank (ADB), Asian Infrastructure Investment Bank and the US Overseas Private Investment Corporation (OPIC)) that is attempting to arrange financing for the Anaklia port project. The talks centred on a plan to extend $400mn of financing for the first stage of the port if the state’s agreement to certain conditions could be obtained. At the meeting, officials rejected one of eight outlined conditions. The condition not agreed required the government to cover the risk of insufficient traffic volume at Anaklia.

Another aspect of the set of difficulties faced by the ADC investors is an apparent longrunning disinformation campaign stemming from Russia that, given the US investors that feature in the consortium, may be aimed at damaging an investment that could deliver more Western influence in Georgia. Disinformation outlets have even painted a scenario in which the port could become a US military base.

‘Room for both projects’
In a TV interview given to Palitra TV station, Georgian Dream ruling party MP Giga Bukia claimed that the port project in Poti would not endanger the Anaklia project as the market could provide room for both. He added that talks with China on developing a major transit route involving Georgia [most probably under Beijing’s massive Belt and Road Initiative—Ed.) were encouraging and that even more port capacities than Anaklia and Poti could supply together might be needed.

Chinese Foreign Minister Wang Yi paid a historic visit to Georgia—the first official visit of a Chinese foreign minister to the country in 23 years—to learn more about the country’s prospects and potential, the Georgian Foreign Ministry reported on May 24.

Notably, OPIC is to contribute $50mn of $94mn so far needed for the development of the port in Poti. The developer is Pace Georgia.

OPIC began cooperating with the ADC to fund the Anaklia port development in 2018. “The financial institution plans to invest about $100mn in the seaport construction works,” CBW.ge reported in August 2018.

Thanks to a dictator who jokes about keeping coronavirus at bay with vodka, the Minsk derby became the big game for football punters around the world as the Belarus Premier League got permission to carry on. Infectious enthusiasm, fatal for some?

Hard currency reserves back in focus. Net portfolio outflows since December 20 stacked up to $6bn.

For the banking sectors in CEE, hypothetical stress scenarios are becoming reality. A forum like the Vienna Initiative could be an ideal place to find coherent solutions during the current crisis.

ING: Negative growth for Central and Eastern Europe with more easing ahead
2 days ago
Lukashenko’s death match
6 days ago
TURKEY INSIGHT: Peering into the forex hole
7 days ago
THE MITTELEUROPEAN VIEW: Why it is exactly the right time to fully revive the Vienna Initiative 1.0
10 days ago
BCS: Pricing in a global recession
13 days ago