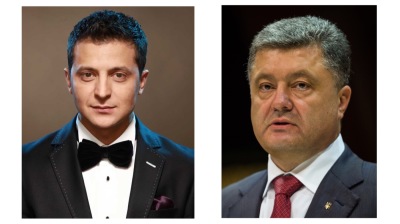 Ukrainian comedian will win 72% of the votes on April 21 election say polls
By bne IntelliNews April 17, 2019

Of the total number of respondents who are going to vote in the second round of the Ukrainian presidential election on April 21 (and have already decided on a candidate), 72.2% said they would vote for Volodymyr Zelenskiy, a comic and a close associate of the controversial oligarch Ihor Kolomoisky, according to results of a survey conducted by the well respected Kyiv International Institute of Sociology (KIIS) from April 9 to April 14.

The survey is based on personal interviews with 2,004 persons in 129 towns and cities across Ukraine, except Crimea annexed by Russia in 2014, took part using a three-level stochastic sample representative of the population of Ukraine aged 18 and older. The survey was conducted only in the territory that is controlled by the Ukrainian authorities in the Luhansk and Donetsk regions.

Meanwhile, on April 16, a group of Ukrainian respectable media outlets and journalists appealed to Zelenskiy, who has mainly avoided direct contact with reporters over the past months, to attend a press conference no later than on April 18

"We urge you not to pursue negative practices of ignoring media demands, which have unfortunately also taken place during the past five years, and hold a press conference for the media before the official date of debates [no later than on April 18] in order to ensure the dialogue with media representatives in particular and with the Ukrainians in general," their statement reads.

Zelenskiy has also avoided a face-to-face debate with Poroshenko. On April 14, Poroshenko was forced to communicate with journalists and his supporters at the national Olympic stadium in Kyiv due to the fact that his rival refused to take part in what should be the first face-to-face debates between candidates. Poroshenko was left to debate an empty lectern after the two candidates could not agree on a date to meet: Zelenskiy had offered April 19, but Poroshenko insisted on April 14.

"I want to know for myself his position on the most important vectors of the implementation of the powers of the president and supreme commander-in-chief of the armed forces, the guarantor of the constitutional rights and freedoms of the citizens, and the defender of Ukraine," Poroshenko's told the audience at the stadium which turned into a campaign rally.

He would also like to hear from presidential candidate Zelenskiy the position on negotiations with Russian President Vladimir Putin and liberation of the Ukrainian territory occupied by Russia. "But for some reason, he does not tell it. I do not think it's very good. This is not a disrespect for Poroshenko, this is a disrespect for the people and for the country, for the voters in the end," he added.

"Pull yourself together and come," Poroshenko said addressing Zelenskiy.

Another debate has been scheduled for April 19, but the two candidates were bickering over what time the event should start.

Late on April 16, Oleh Medvedev, the spokesman for Poroshenko, said the president would not participate in the debate on April 19 after Zelenskiy allegedly rejected a time frame of 4pm to 6pm for the event. Medvedev said Zelenskiy’s team had demanded that the debate begin at 7pm.

The Central Election Commission (CEC) has also ordered a mandatory TV debate on April 19, that was scheduled to start at 7pm.