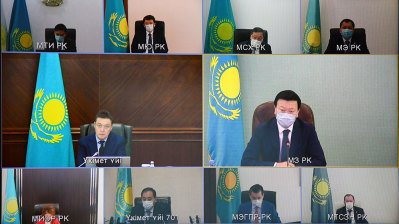 Kazakhstan is one of several countries in Central Asia, the South Caucasus and the Western Balkans that are seeing a strong rise in daily new cases after the easing of restrictions.

Governments are faced with the tough choice of allowing economic activity to continue and risking a rise in new cases, or imposing new restrictions with the consequence of more economic damage. For the poorer countries in the region that don’t have the financial resources to subsidise the economy through a lengthily lockdown, this is a particularly difficult dilemma.

Kazakhstan’s second lockdown, announced originally in a tweet by President Kassym-Zhomart Tokayev, will last for weeks under softer conditions than the previous lockdown that ended in mid-May, the government said on July 2, after coronavirus (COVID-19) cases rose more than sevenfold following the lifting of the first lockdown.

From July 5 the authorities closed some non-essential businesses, cut public transport services’ hours of operation, limited travel between provinces and banned public gatherings. However, the Central Asian nation will maintain air and rail links between its provinces and air links with a limited number of countries.

Kazakhs will also be allowed to leave their homes to take walks but only in groups of no more than three people. Cafes and restaurants with outdoor seating will be allowed to continue operating. The government may tighten or extend the measures later, the cabinet said in a statement.

“In Kazakhstan – the tightening of measures is not a full lockdown. People allowed outside in groups of three, [cafe] terraces remain open … gyms and hairdressers close again and 80% distance working for state bodies. Looks like an attempt to slow their virus surge – as in southern US states – not to suppress the virus as East Asia and Europe did,” wrote Charles Robertson, Renaissance Capital’s global chief economist, on July 3.

As Kazakhs rushed to carry out errands before the lockdown came down, bne IntelliNews’ correspondent in Almaty reported that the mood in the country was generally resigned – at least among the middle class – though many service sector workers are annoyed by the new restrictions, and downplay the severity of the pandemic.

The government cast some of the blame for the upturn in new cases since the lockdown was eased on to citizens. “It is no secret that people have been secretly doing weddings, meeting with their families and doing get-together events. Because of their thoughtless actions, people end up in hospital beds, to say nothing of the fatal cases. Each of us should be responsible not only for our own health but also for the health of our loved ones,” said Deputy Prime Minister Yeraly Tugzhanov in a statement on July 2, as reported by the Astana Times.

As of July 6, the ex-Soviet state confirmed 48,574 cases, including 188 deaths, according to World Health Organisation (WHO) data. 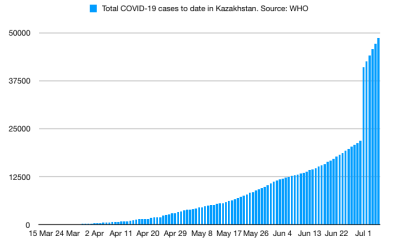 However, there is some confusion over the figures coming out of Nur-Sultan, as the official infection tally reported by the Ministry of Health and the WHO showed a sharp increase of around 20,000 in one day at the end of June/beginning of July. It appears that the government started including asymptomatic cases in the total infection tally at that point.

bne IntelliNews sources in Kazakhstan say that few people were perturbed by the sudden jump in infection numbers, as most didn’t trust the official figures in the first place. Speculation that the true numbers are being underreported is rife, supported by reports of numerous hospitalisations for pneumonia alongside those admitted with COVID-19.

Elsewhere in Central Asia, new infections are increasing steadily in Kyrgyzstan, Tajikistan and Uzbekistan – while secretive, authoritarian Turkmenistan continues to insist it has no cases at all, despite expecting a World Health Organisation (WHO) team to visit in early July.

“Among the countries of the region, we see high chances for Uzbekistan to re-introduce quarantine after Kazakhstan. Uzbekistan has already imposed a curfew and a ban on mass gathering from 1 July, but this is likely a transitional phase. Most other countries are either crossed the line in terms of cases where re-introducing a lockdown looks reasonable (like Armenia) or are constrained by political or fiscal trade-offs. The one notable extension is still Georgia, that managed to contained the virus without country-wise tightening,” wrote Sofya Donets, Russia & CIS economist at Renaissance Capital.

Rising infections in the South Caucasus 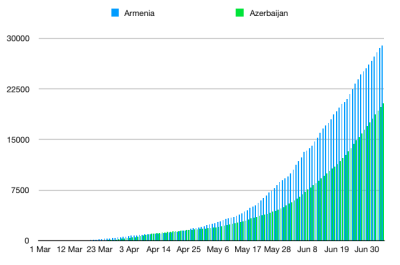 Azerbaijan already imposed tighter new restrictions in Baku, resulting in a build-up of traffic on roads out of the city as residents tried to leave ahead of the lockdown. However, Azerbaijan’s top traffic policeman Kamran Aliyev said Baku residents seeking to travel to their weekend houses or other parts of the country would be turned back.

Azerbaijan has seen an increase in quarantine measures in recent weeks as fears of a second spike in coronavirus infections continue to grip the country. The disease has continued to spread unchecked in the small but densely populated country. Since June 23, the country has not seen fewer than 500 new cases in a day.

On June 30, Azerbaijani authorities voiced concerns over the country’s ability to deal with the rising number of coronavirus cases.

During a recent visit to open a new modular hospital in the city of Ganja, President Ilham Aliyev gave an unprecedented warning that the country may not have enough doctors to treat patients if the virus continues to spread at the current rate.

Armenian Prime Minister Nikol Pashinian warned that a second lockdown could be imposed if the country’s healthcare sector became unable to cope with new cases, Arka reported. Pashinian also said he expected the state of emergency, first imposed in March and repeatedly extended, would be prolonged for another month.

Speaking to journalists after a meeting of the government task force on the pandemic, Pashinian said his government was ready to take “decisive steps” to combat the virus.

Armenia has had by far the largest number of cases per capita in the emerging Europe region, and one of the highest tallies in per capita terms worldwide.

It is also one of the poorest countries in the region, meaning it has less financial resources to sustain the economy through a shutdown.

To try to prevent a second lockdown, Pashinian appealed to Armenians to change their behaviour to stop the spread of infections.

“[A]dministrative methods alone can't work. On Saturday, I toured Avan administrative district and distributed masks. I can say that the main problem is that citizens do not believe in the impact of individual behaviour change on the situation. It was a surprise to me that many citizens did not report any infection around them, which further complicates our task,” said the prime minister, according to a government statement.

Iran’s official figures have been criticised for months, with the country not releasing the comparison total of all deaths during the past four-month period versus previous years.

The spike in infections comes at a time when the country is trying to keep business open as the Iranian rial has collapsed to its lowest-ever free-market exchange against foreign currencies. 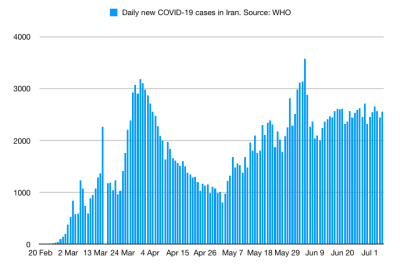 The Iranian government has stepped up efforts in recent months to demand people wear masks on public transport as well in public; however, many people continue to ignore the risks.

The Ukrainian government has been mulling a new lockdown, even though as one of the poorest countries in Europe it can ill afford to do so.

At the end of June, Prime Minister Denys Shmyhal told the BBC that the quarantine/lockdown will be re-imposed nationally should the rate reach 60 cases per 100,000.

However, Health Minister Maksym Stepanov told his daily press briefing on July 3 that Kyiv will maintain its policy of adaptive quarantine – with both general and regional preventive measures – despite the infection rate having reached the 60 active cases per 100,000 threshold.

"The infection rate is on the brink, but relatively stable compared to last week," Zenon Zawada, an analyst at the Kyiv-based Concorde Capital brokerage, said in a research note.

There is also a worrying increase in new cases in the Western Balkans, including in countries which previously appeared to have defeated the virus.

In Serbia, the government declared a state of emergency in the capital Belgrade on July 3, as the number of new cases rises. 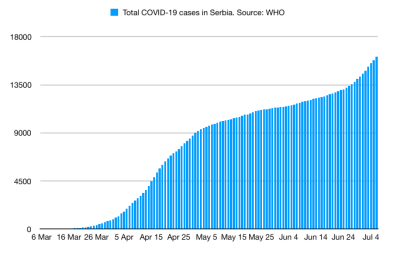 To contain the spread of the virus in Belgrade, the government has closed all night clubs and restaurants between 11pm and 6am. It has also banned public gatherings of more than 100 people in closed areas and above 500 people in outdoor areas.

In public gatherings, a distance of 1.5 metres between people should be kept. Face masks are obligatory in public transport and all indoor public facilities.

Within just a few weeks, Montenegro went from declaring itself coronavirus-free as the final patients suffering from the disease recovered, to imposing curfews and restrictions on movement in several towns. There is now talk of a new lockdown in the capital Podgorica, as the number of coronavirus cases in the country has risen significantly in the last few days. Kosovo also set a curfew in four cities to tackle outbreaks of the virus. Slovenia, which had previously declared the end of its epidemic, is now reporting tens of cases daily.