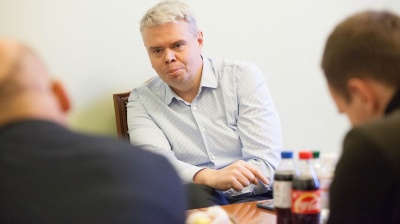 The Council of the National Bank of Ukraine (NBU) has sacked well-respected deputy governor Dmytro Sologub, who was part of the previous management team that oversaw a comprehensive clean-up of Ukraine’s banking sector over the last four years.

“Massive, massive loss to the NBU,” Tim Ash, senior sovereign strategist at BlueBay Asset Management, said in a note to clients. “I cannot underscore what an immense contribution Dima has made to improving the institutional strength of the NBU, particularly in macro and forecasting.”

The NBU Council agreed at a meeting on June 23 to sack Sologub, who was responsible for the work of the Monetary Stability division, effective July 12, based on the expiration of his term in the post on July 10, the press service of the NBU reported on June 23.

The NBU is selecting a replacement candidate, the press service said in a statement.

Sologub and Kateryna Rozhkova are the only hold-overs from the previous team that worked under former governor Yakiv Smolii, who was widely respected by the market. Smolii was forced out of office last summer because of what he claims was political pressure. Smolii was replaced by Governor of the National Bank of Ukraine (NBU) Kyrylo Shevchenko, who clashed with the former team, who were publically reprimanded by the NBU Council.

Rozhkova came out swinging after the lambasting and demotion in October. She criticised the NBU board's decision to redistribute responsibilities, which has substantially narrowed her powers.

"I provide my personal comment on the decision to redistribute powers at the NBU," she wrote on her Facebook account on October 26. "Dmytro [Sologub, NBU Deputy Governor] did not support this decision. Firstly, this approach does not correspond to the best world practices. Secondly, it not only creates threats to making the regulator truly impartial, but also destroys collegiality." She also suggested the scandal would undermine Ukraine’s relations with the IMF.

Rozhkova and Sologub filed a legal claim with the Kyiv District Administrative Court against the NBU Council last December after they were both publically reprimanded by the council in October. Their functions were also transferred to Shevchenko, who personally took over their portfolios. Goesta Ljungman, the IMF resident representative in Ukraine, condemned the reprimands. The IMF has been concerned by the decaying independence of the NBU, one of the issues that has caused the Fund de facto to suspend a $5bn stand-by agreement (SBA).

“Dima has become the point person for investors to understand the Ukraine macro story and how the NBU thinks about these things. He has also been a voice of reason on issues related to HR changes and around the independence of the NBU,” Ash said. “He will be very, very hard to replace, which does raise the question as to why the hell he [is] not being rehired for a second term?”

Ash argued that the decision signals that the NBU will move towards a looser monetary policy as a result. The NBU surprised the market last week by deciding not to hike interest rates, despite a surge in inflation in May that took the rate to 9.5%.

“It seems very much that the NBU will now move in a different direction with looser policy, and I think we may have seen that to some extent with last week’s surprise decision not to hike rates in the face of sharply higher inflation,” said Ash.