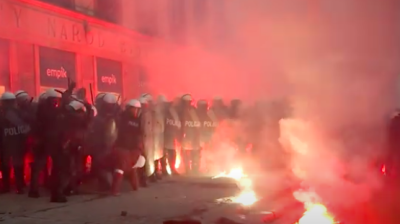 The annual Independence March by Poland’s far-right descended into chaos on November 11, exposing the authorities’ inability to deal with the politically charged event that drew thousands, defying restrictions to contain the coronavirus (COVID-19) pandemic.

The annual Independence March has gained notoriety in recent years in Poland after having become the flagship event of the Polish far-right groups, sidelining other attempts at joyous and peaceful celebrations of Poland’s rebirth as a state after World War One in 1918.

Every recent Independence March featured far-right and fascist imagery as well as controversial sloganeering such as “Europe will be white or uninhabited” or “White Europe of Brotherly Nations”.

The main slogan of this year's march was “Our civilisation – our rules”. The participants also bore banners reading “Normal family – strong Poland”, a reference to the nationalists’ opposition to Poland’s rising LGBT rights movement, also targeted by the government.

The march’s organisers – an association made up of a number of far-right political organisations, including the National Movement party – initially said that the event would be a motorised parade after Warsaw’s liberal mayor banned the march as breaching anti-coronavirus regulations.

The march would be an occasion to show that “we are a state or a society ... which relates to these traditional, conservative, Christian, Catholic values,” Robert Bakiewicz, one of the organisers, told government-run broadcaster TVP Info.

While the car parade did take place, the focus was on thousands that showed up in defiance of the restrictions, with some groups attacking police. Rioters also vandalised a book store along the march’s route and threw flares at a building that had an LGBT flag and a banner for Women’s Strike, a women’s rights organisation, on display. A flat caught a short-lived fire as a result.

Police detained hundreds of people during and after the march, private radio RMF FM reported.

Poland’s right-wing government, which has occasionally pandered to the far-right, was initially reluctant to condemn the events.

“We don’t know the facts at the moment. We should look into who provoked the scuffles,” Deputy Prime Minister Piotr Glinski told private broadcaster Polsat.