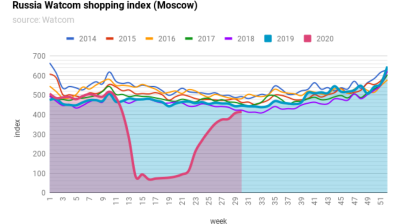 Moscow’s Watcom shopping index has regained almost all the ground lost from a lockdown on the capital earlier this year
By bne IntelliNews August 4, 2020

The index tracks foot traffic in the leading malls in the Russian capital in real time and it collapsed to all-time lows in May after Muscovites were ordered to stay at home by Moscow Mayor Sergey Sobyanin.

The index fell from its usual values of between 400 and 500 to lows of below 100 for more than two months as the authorities tried to reverse the growth in the number of infections.

However, as the summer arrived Russian President Vladimir Putin ordered the lockdown rules to be eased as Russians went out to vote in a nationwide referendum on changes to the constitution that have extended Putin’s terms in office to 2036, as well as to celebrate the 75th anniversary of the victory against Nazi Germany.

The index has recovered almost all of the ground lost, reaching a value of 414 in the 30th week of the year, against values of 446, 423 and 455 in the same week in each of the previous years back to 2017 respectively.

The infection rate in the capital has fallen precipitously thanks to the lockdown, but the epidemic is far from over in Russia, which continues to record some 5,000 new cases a day, down from the peak rate of circa 11,000, and almost a million people have already been infected, according to the official numbers. Observers say the real rate of infection could be three to ten times higher.

A second wave of infections has started to sweep the region, although not in Russia yet. This could lead to a second lockdown, as Czechia has already re-imposed restrictions. Most countries are trying to avoid new restrictions due to the economic damage they do; however, Sobyanin showed himself to favour very strict lockdown regulations and had called for the regime to be kept in place until the virus was gone, until he was overruled by Putin.