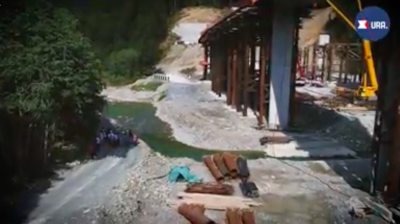 Construction of the first priority stretch of Montenegro’s key Bar-Boljare motorway has devastated the riverbed of the Tara river, which is protected by UNESCO, the opposition URA party said on September 12.

Concerns about pollution of Tara following the construction of the first priority stretch from Smokovac to Matesevo of the Bar-Boljare motorway have been expressed by anti-corruption NGO MANS as well.

“On the photo we share with the public clearly can be seen that the riverbed of Tara was devastated by narrowing it with the creation of artificial dykes, mainly of shot and construction material on the two sides of the shore, and the flow of the river has been changed so that in one part it has completely changed its flow, continuing to flow at right angle of 90 degrees,” URA claims as quoted by broadcaster RTCG.

On its Facebook profile, the party published a video showing the devastation of the river. It claims that in some sections the damage is irreversible.

Construction of 44km Smokovac-Matesevo stretch was launched in April 2015 and should be completed by mid-2020.

The 169-km Bar-Boljare road project is significant in comparison with the size of Montenegro's economy, carrying both benefits and risks. In the past few years, it has pushed up economic growth, but left Podgorica with few options to invest in other significant infrastructure projects.

MANS has many times voiced concerns about the project, claiming it has given room for corruption and lacks transparency. Also, MANS has several times warned that CRBC was not building the motorway stretch with proper materials.

In June, MANS filed a claim against Tourism Minister Pavle Radulovic and Transport Minister Osman Nurkovic over what it said was "environmental devastation" associated with the Smokovac-Matesevo construction.

MANS claims that CRBC is depositing waste into the riverbed and on the banks of Tara river and, despite warnings, the government has not taken any steps to prevent that.

Russia has denied accusations of interfering in Montenegro’s general election on August 30 when a coalition led by pro-Russian Democratic Front gained enough votes to be able to form a coalition ... more

A new round of talks between Montenegro’s government and the Serbian Orthodox Church (SOC) have ended without progress after the two parties failed to agree to a compromise, Prime Minister ... more

54 people, including two members of the opposition Democratic Front, were arrested in Montenegro late in the evening of June 24 in protests in several towns that turned violent, the ... more