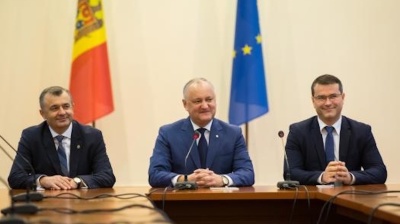 Moldova could “take a break” in its collaboration with the International Monetary Fund (IMF), said Prime Minister Ion Chicu during the Fourth Power show broadcast by N4 TV station. According to Chicu, this could happen if the IMF “does not show flexibility.”

The Moldovan prime minister mentioned that on March 20, 2020 the programme with the IMF expires and discussions will be held on a new programme.

"If the IMF will be flexible enough to accept our vision, we will continue the collaboration, if we do not see flexibility, we do not exclude the option of taking a break," said Chicu.

Chicu said that at present there are several conditionalities agreed by the the former government headed by Pavel Filip with the IMF.

"They insist we should fulfil them. Some of them are completely unacceptable,” Chicu said.

Dodon held a meeting with the head of the mission of the International Monetary Fund for Moldova, Ruben Atoyan, on November 26, telling the fund official that "the actions of the new government will be based on the national interests of the Republic of Moldova, the protection of the local economic agents and for the support of those vulnerable ".

No protests, but police continue to randomly arrest pedestrians on Belarus Independence Day
1 hour ago
Governor Smolii’s departure from the NBU creates the risk of devaluation of the hyrvnia or default on its debt this year
23 hours ago
Croatia heads for hung parliament in July 5 election
1 day ago
Evidence of massive ballot stuffing emerges in Russia's referendum on constitutional changes
1 day ago
Poland’s coal production falls to all-time low in May
1 day ago