Lukashenko warns of war, closes the Western borders… not 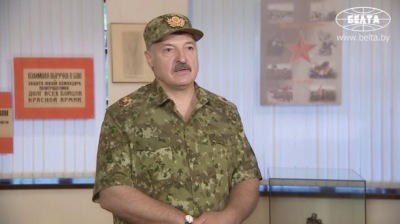 Belarusian President Alexander Lukashenko warned of war and claimed to close the Western borders with Poland and Lithuania as he attempts to distract from the mass weekly rallies calling for his resignation
By Ben Aris in Berlin September 18, 2020

Belarus' self-appointed President Alexander Lukashenko called on the people of Poland and Lithuania to “stop your crazy politicians”, whom he warned are spoiling for war, and announced that he was closing the borders with Poland, Lithuania and Ukraine.

Except reports from the border say they were working as normal and had received “no information” from Minsk to halt traffic.

Lukashenko earlier put the army on full alert and moved troops to the western border warning of an imminent attack by NATO on Belarus as part of an attempt to distract attention from the mass rallies organised to call for his resignation after he blatantly falsified the August 9 presidential elections, handing himself a landslide victory. Last week he withdrew the troops, saying it was “too expensive” to keep them there. However, he continues to claim that Poland and Lithuania are plotting against Belarus and are under the control of the US.

NATO and Western officials have dismissed Lukashenko's claims as “nonsense.”

Another weekend of very large-scale demonstrations looms, but Lukashenko, backed by Russia, refuses to back down. The Belarusian leader met with Russian President Vladimir Putin this week in Sochi and received a $1.5bn loan, which turned out to be little more than a refinancing of existing debt to Russia: counting out loan repayments due soon to the Russian state and the state-owned gas giant Gazprom, there will be almost nothing left of the $1.5bn, leaving the government in Minsk under severe financial pressure.

The protest movement was still gathering momentum as an estimated quarter of a million people attended last Sunday’s weekly rally, the biggest yet, and similar numbers are likely to rally this weekend in the “March of the flag and of the regions” protest.

Exiled Belarusian opposition figure Svetlana Tikhanovskaya continues to lobby the international community from her base in exile in Lithuania and this week made explicit a deal that was suggested by the newly established Coordinating Council: she promised Lukashenko his safety will be guaranteed if he “peacefully” gives up power.

Lukashenko has refused to acknowledge the Coordinating Council and the state has opened a string of probes into the body, accusing it of trying to organise a coup d'état. All but one of the members of its presidium are either in exile or in jail.

Speaking to Ukrainian publication Left Bank, Tikhanovskaya explained that a future non-Lukashenko government would take the opinions of Belarusian citizens into account, meaning he would receive “even more” than just basic security guarantees.

“This is all negotiable. Of course, if he leaves peacefully and humanely, it's probable,” she answered, when asked if she would promise the current president's safety.

Tikhanovskaya also commented on the make-up of what her cabinet would be if she takes office. She said that an interim government would be formed from current ministers, and then any future decisions would be made by whomever won a new election that she would immediately call on taking office.

The Kremlin has also refused to acknowledge the Coordinating Council. Kremlin spokesman Dmitry Peskov reiterated the official line that Lukashenko is the “legitimate president of Belarus” on September 17 and therefore doesn't need Tikhanovskaya to ensure his safety.

“I don't think he needs any security guarantees in his own country,” Peskov said. “As for the rest, it's all internal affairs of Belarus.”

Tikhanovskaya criticised Putin on September 16 ahead of his meeting with Lukashenko, whom she called the “usurper,” and claimed that any deals made between Moscow and Minsk would have “no legal force” and would be “reviewed by the new government.”