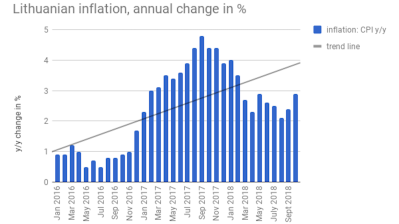 The annual price growth in October extends the inflationary trend in the Lithuanian CPI to 34 months. Inflation is approaching the 3% mark again after a series of subdued readings in six previous months.

Prices increased in all but two segments in October. Similarly to September, growth in the headline CPI was driven by a 9.3% annual expansion in transport prices. With oil prices beginning to decline, however, the impact of the transport category should diminish as well.

Prices rising 5.7% y/y in the housing segment and a price growth of 2.8% y/y in the alcoholic beverages and tobacco products segment also contributed. Prices of food grew 0.2% y/y in September.

Broken down by product category, inflation was driven primarily by expanding prices of fuels and lubricants, solid fuels, vegetables, as well as catering services and car repair, data showed. On the other hand, growth was impeded primarily by falling prices of fruits.

“Price growth is set to fluctuate around a similar level in the near future. We expect average annual inflation to ease to 2.7% this year and remain at the same level throughout 2019. Price growth in consumer goods is likely to remain modest in the future, while services inflation will remain elevated to due rapidly rising labour costs,” Swedbank said in a comment.

The European Commission predicts slightly more moderate inflation, at 2.6% in 2018.