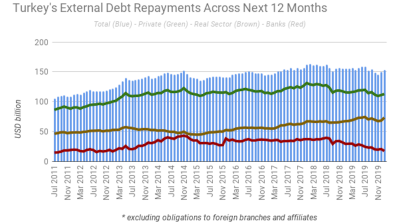 Turkey’s external debt maturing in one year or less regardless of the original maturity, and excluding obligations to foreign branches and affiliates, was up by $3bn m/m, or 2%, to $153bn at end-January, according to latest data from the central bank.

The all-time high level of $164bn was seen at end-February 2018, prior to the Turkish lira (TRY) crash six months later in August.

The private sector, meanwhile, has obligations, excluding obligations to foreign branches and affiliates, to pay $113bn (up from $111.3bn at end-2019).

The data suggest that there has been no improvement as regards the Turkish real sector’s external debt—seen as the country’s main woe following the currency crisis—in the so-called “rebalancing” period.

The external financing needs for 2020 remain high. The magnitude of the current account deficit to be added to this figure will depend on the outcome of the ongoing coronavirus (COVID-19) pandemic.

William Jackson of Capital Economics said in a March 24 note entitled “EM capital flows: bank flows are the big risk”: “The idea that EMs are facing a ‘sudden stop’ in capital flows has started to gain traction. This will create major problems if borrowers with maturing external debts can’t roll these over or face prohibitively high borrowing costs. If that happens, either central banks would need to sell foreign currency from their reserves to residents (which isn’t necessarily sustainable) or domestic demand will need to weaken to generate the current account surpluses needed to repay these debts”.

Jackson added: “Weekly figures published by the Turkish banking regulator show that foreign banks haven’t reduced their exposure to the country (up to 19th March). While only one economy, its well-known external vulnerabilities, of which the banks are a large part, suggest that a pullback in global bank flows would show up there first. Elsewhere, indicators of bank stress (e.g. interbank rates) aren’t flashing red (yet).”

He also noted: “However, if governments in the developed economies can’t shield their banks from the economic effects of the coronavirus, that could result in a much more abrupt pullback in bank flows from emerging markets. Were that to happen, the economic impact could be even more damaging than what we’ve seen so far.”

Edward Glossop, also of Capital Economics, wrote in a March 24 note entitled “Are we about to see a wave of sovereign defaults?”: “Excluding Venezuela, Argentina and Lebanon (where governments are already in the midst of sovereign defaults) 17 EM governments now have bond spreads exceeding 1,000bp—a threshold that has historically preceded defaults. This includes the likes of Ecuador, Zambia, Angola, Nigeria and Ghana.”

NBU lionises Smolii, clarifies cancellation of Eurobond decision
23 hours ago
No protests, but police continue to randomly arrest pedestrians on Belarus Independence Day
22 hours ago
Governor Smolii’s departure from the NBU creates the risk of devaluation of the hyrvnia or default on its debt this year
1 day ago
Croatia heads for hung parliament in July 5 election
1 day ago
Evidence of massive ballot stuffing emerges in Russia's referendum on constitutional changes
2 days ago