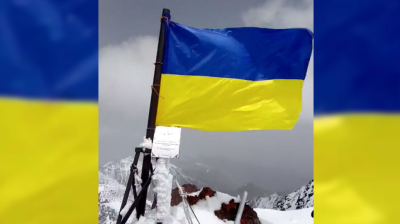 Police in Kyrgyzstan are dealing with the embarrassing spectacle of a Ukrainian flag planted atop a mountain named Peak Putin.

In a prank clearly designed to, er, pique Putin, and add stature to those in the Central Asian nation who object to Bishkek’s decision not to speak out against the Kremlin for waging war on Ukraine, climbers planted the flag on top of the peak in the Tian Shan mountains, 4,446 metres above sea level and named by the Kyrgyz state in honour of Russian leader Vladimir Putin in 2011.

Police in Kyrgyzstan told AFP the perpetrators of the prank could face a fine for “hooliganism”. 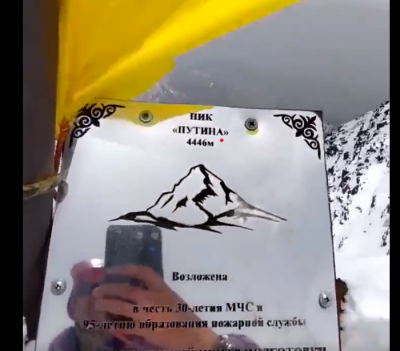 The mountain was dedicated to the Russian leader in 2011. The taller Peak Yeltsin is nearby (Credit: @morgan_god / twitter).

A Twitter user, who said they were a mountain climber, on May 24 posted a video of the Ukrainian flag flying next to a plaque marking the mountain as Peak Putin, with a message saying: "Some hooligans brought it here and planted it, we have no idea who they were." An emoji added to the message appeared to denote sarcasm.

Police in Bishkek told AFP on May 26 that they were in contact with two climbers whom a ranger indicated were seen heading towards Peak Putin on the evening of May 24.

"During questioning as witnesses, they explained that they discovered the flag after they climbed the peak and filmed it on a telephone," a police spokesman told the news agency.

The user of the Twitter account that posted the video wrote on May 26 that her climbing partner was questioned by police and that she was due for a police interview on May 27.

She added that people given the task of removing the flag from Peak Putin had been in contact with the pair to ask how to get up the mountain.

But Peak Putin and the Yeltsin mountain are dwarfed by the 7,134-metre Lenin Peak found on Kyrgyzstan's border with Tajikistan. It is one of the tallest peaks in the region.