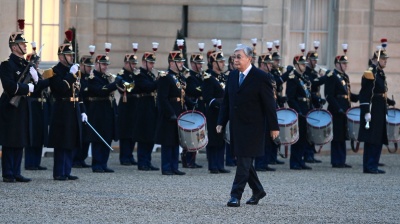 At the meeting with Putin, Tokayev noted that his choice to visit Russia first bears a symbolic meaning to signify that Kazakhstan still considers Russia to be its main “strategic partner”. His visit took place amid global speculation that Kazakhstan is moving away from Russia’s sphere of influence.

Though Tokayev publicly refused to recognise Russia-occupied puppet states on the territory of Ukraine — Luhansk and Donbas — as independent, he has never explicitly taken a stance against Russia’s war in Ukraine, choosing to focus on general statements about peace instead.

"This is my first foreign visit after this event and that in itself has political significance and, of course, a certain symbolism," Tokayev was quoted as saying, ahead of talks with Putin.

"For Kazakhstan, Russia is and has always been a strategic partner," he added.

Putin told Tokayev at the meeting that relations between Russia and Kazakhstan have a "special character”.

Tokayev’s meeting with Macron also appeared to have a symbolic meaning, treating Macron as a stand-in for Europe at large, as Kazakhstan has recently been boosting its cooperation with the EU on issues of international trade and energy exports.

The leaders mainly focused on discussing political and economic cooperation during Tokayev’s visit.

According to a statement from the Kazakh presidency, Tokayev told Macron that “this is a great opportunity to strengthen the strategic partnership between the two countries and bring relations to an even higher level”.

Aside from the symbolic matters, Kazakh President Kassym-Jomart Tokayev and Russian President Vladimir Putin discussed the creation of a "trilateral gas union" with Uzbekistan, Ruslan Zheldibay, the press secretary of the Kazakh leader, said at a press briefing.

He noted that “such areas of cooperation are being considered since Russia, Kazakhstan, and Uzbekistan have had a single gas transportation system since the USSR."

He added that China is being considered as one of the main destinations for gas exports. This too likely signifies Tokayev’s willingness to lend a hand to Russia in difficult times as it would be easier for Russia to rely on existing gas transit systems than to build new ones.

Kazakhstan has also remained one of the primary territories through which Russia can conduct its parallel import schemes in order to bypass some of the sanctions restrictions. Kazakh authorities have made a show of making sure that sanctions are respected, including issuing official bans on re-exporting certain goods to Russia.

However, Kazakhstan has also admitted that smuggling remains a major problem at the border and Tokayev’s regime is likely not too harsh on the issue, as it provides another way for Kazakhstan to be seen as useful for Russia’s interests, rather than as a geopolitical and economic backstabber.

A US Treasury and Commerce Department list of at least 18 countries with transshipment points that are known to have allowed restricted or controlled exports through to Russia and Belarus, violating Western sanctions, includes Kazakhstan and four other ex-Soviet nations.

The Kremlin has also previously indicated that it is "absolutely normal" for Kazakhstan to attempt to attract investors and Western firms that have been leaving Russia due to sanctions. At the same time, Moscow has also signalled concerns over Kazakhstan losing interest in Russia-led projects and suggested it needs to win back Kazakhstan by understanding what its neighbour wants.

But all in all, the view in the West that Kazakhstan is attempting to move away from Russia might be exaggerated, even if Tokayev has been attempting to secure Western investments and continue to build on its strong economic links with China.